Eric Michael Swalwell (born November 16, 1980) is an American politician serving as the U.S. Representative for California's 15th congressional district since 2013. A member of the Democratic Party, his district covers most of eastern Alameda County and part of central Contra Costa County. Swalwell was raised in Sac City, Iowa, and Dublin, California. While attending the University of Maryland, College Park, he served as a student liaison to the city council for College Park, Maryland. He then interned for Ellen Tauscher and worked as a deputy district attorney in Alameda County, California. Before being elected to the U.S. House, he served as a local appointee on Dublin commissions, and served one term elected to the Dublin City Council. Swalwell was elected to the U.S. House in November 2012, defeating incumbent Pete Stark, a 40-year incumbent who had held the office since 1973. Stark was a fellow Democrat almost a half-century Swalwell's senior; Swalwell was born shortly after Stark's re-election to his fifth term in Congress in the 1980 election. Swalwell took office on January 3, 2013. Swalwell was a candidate in the 2020 Democratic Party presidential primaries from April through July 2019.
Get all relevant Eric Swalwell videos 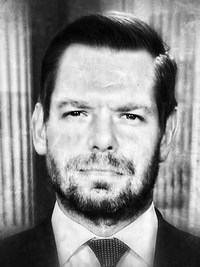