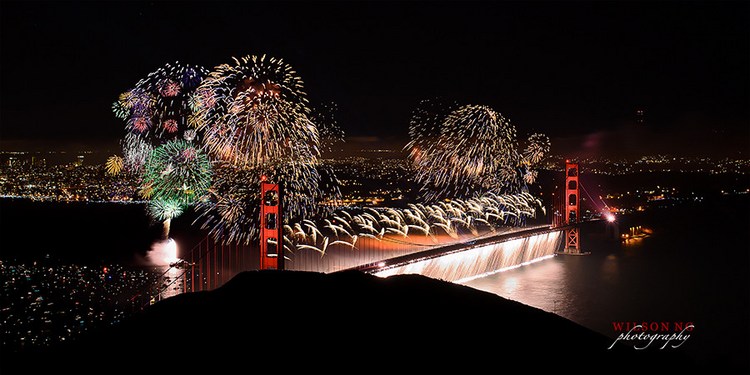 Just the past Sunday, many of us were treated to a magnificent fireworks show at Golden Gate Bridge as we celebrated her 75th Birthday! The festivities run for 2 days and ended with this 30 mins fireworks show. There were quite some planning done to get here to shoot that day. I contacted Aaron M earlier last week to coordinate when and how to get here. Due to many roads closure for the festivities, we were worried about parking situation in the city, so AaronM, Zach and I had decided to come here early. (Thanks AaronM, and Zach for coordinating and for the ride....It was nice shooting with you! Hope we'll get to do it again soon) There were also some debate on where to shoot. In the end, we chose to be up in the hill on the Marin side due to concerns of possible low fog and wind direction after sunset. The compromised made here was that I had to deal with the hill blocking the lower part of this image...well, we can't have everything...so I am not complaining! hehe! As we waited, Jave, Alan, Jared, Carl and Toby also arrived. They even brought a grill to the hill and treated us to some awesome grilled hotdogs while we kill time. (Thanks for the hotdogs and it was nice hanging out with you all again!) (This is a composite shot)

This Zach Wilson - golden-gate-bridge-75th-anniversary on net.photos image has 900x450 pixels (original) and is uploaded to . The image size is 158887 byte. If you have a problem about intellectual property, child pornography or immature images with any of these pictures, please send report email to a webmaster at , to remove it from web.