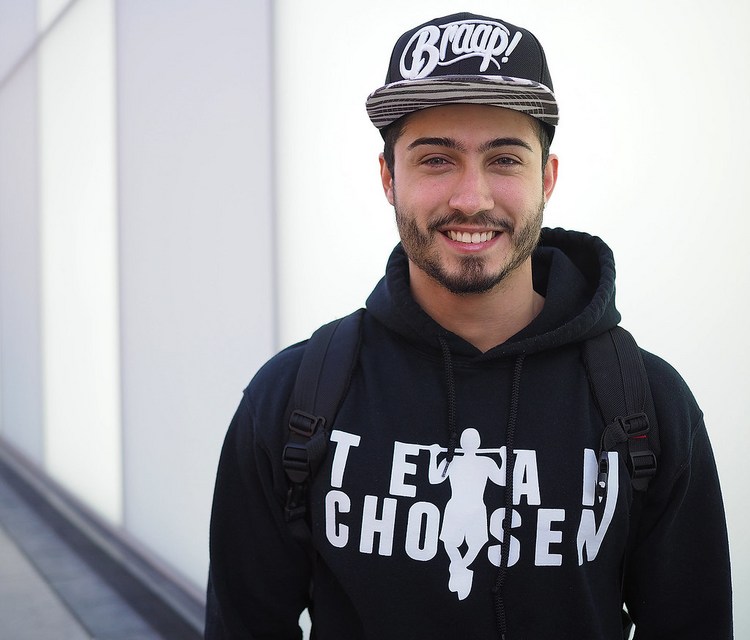 H&M, a clothing retailer, recently completed a renovation and expansion of their store in the Eaton Centre in downtown Toronto. When it was revealed to the public a couple of weeks ago, it featured a wall of frosted white glass, illuminating the sidewalk from behind the glass, much like the light boxes doctors use to review x-rays. Today, after class, I stopped to ponder how this new downtown feature might be used in a street portrait. Convinced it could work, I proceeded to have the first two potential subjects I approached decline. I was about to take this as a message that it was not to be when this young man came along and I thought his dark hat and sweatshirt, combined with his friendly face, could work well against the backlit glass. He said he could spare a few minutes on his way to the gym and suddenly my luck had changed. Meet Matheus. Matheus followed my minimal instructions and once I had him in position and looking into my lens, the photos were soon taken. Matheus is 20 and is working as a fitness instructor and professional calisthenics athlete. He works for a gym which his sweatshirt advertises: bodybychosen.com. He explained that calisthenics are exercised done without equipment other than the body itself. Interestingly, he was born and raised in Brazil and came to Canada on his own to pursue his athletic career. Soon he was sponsored and had a job and things are going well for him. He came to Canada 2 years ago with hardly any English and took ESL classes (English as a Second Language) and with hard work and some luck, things have fallen into place for him. I thought his English was remarkable for someone who has only been here two years and we talked a bit about the courage it takes to leave homeland, family, and friends and create a new life in a foreign land and culture. I’m constantly amazed at the many Torontonians who have managed this. He does miss his old life but annual visits by his parents have helped and he feels the move was a good idea. I didn’t think to ask Matheus what the logo on his cap means. I googled it and found out Braap is a “"Term created by dirtbike riders, and motocross riders. Often said when everyone would go riding...when riding bicycles, lifting something up, pushing carts...even walking or running. The term grew on and moved to snowmobilers too. BRAAP comes from the noise the two stroke engine produces. Quad riders can use the saying too." I assume that for Matheus it is a reference to his hard exercise routines. When I asked about his greatest challenge in life he quickly said “That would be the death of my grandmother. She was really my second mother and she died when I was 13. That was very difficult to accept.” When I asked what helped him overcome that loss he said it was the love and support of family and friends. The importance of friendships and family relationships is a common theme of the strangers I meet. How would his friends describe him? “I think they would say I’m a funny and outgoing guy. I’m usually very positive and I like to hang out with my friends.” His advice to his younger self? “I should have studied harder in school. My parents told me that since I was young, but I didn’t listen and now I wish I had.” In my brief conversation with Matheus I was impressed by his friendliness and his openness. He seems a motivated young man. I have a feeling his positive attitude, motivation, and discipline will serve him well in his career and in life. Thank you Matheus for taking a few minutes to meet and participate in The Human Family project. This is my 188th submission to The Human Family Group on Flickr. You can view more street portraits and stories by visiting The Human Family.

This Young M.a Relationship - matheus on net.photos image has 1024x874 pixels (original) and is uploaded to . The image size is 140927 byte. If you have a problem about intellectual property, child pornography or immature images with any of these pictures, please send report email to a webmaster at , to remove it from web.