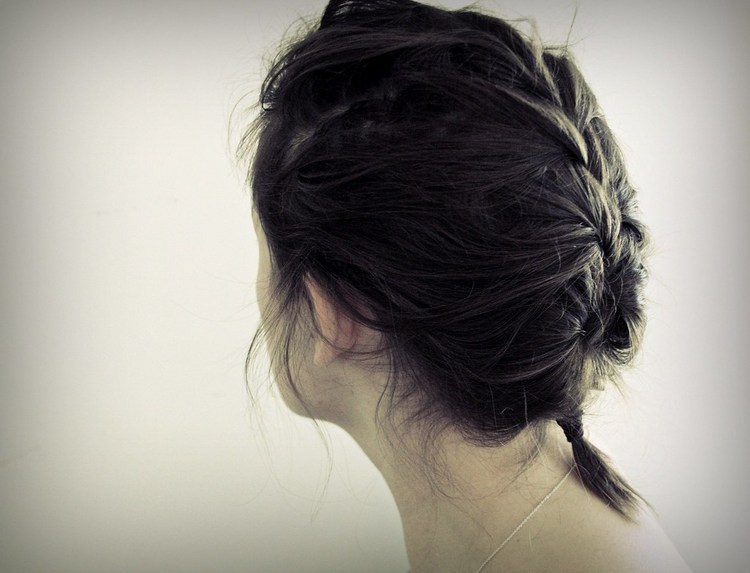 10 Things... 1. I like my hair in a french braid. It started in middle school, when we did our hair like this on the Pom-Pom team. 2. I work part-time for a chiropractor. I took the job after quitting my previous job working at an alternative high school in Trenton. I'd quit that job because I couldn't stand the way the students were being treated by the school's new owners. I reported the school to DYFUS. Nothing came of it, except that they were investigated for a short period last year. The owners of the school are sly bastards. And they know how to work an investigation. The chiropractic part-time job that came up was perfect because my car insurance company had denied me any more healthcare after a car accident on January 15th, 2008, but I was still in a ton of pain a year later, so free chiropractic care seemed like a relevant job perk. I supplement that job with my little business making soups, breads, and cooking dinner parties for people. Even so, I still usually get three-day weekends. 3. I'm still experiencing a lot of pain from that accident in 2008. I realize that I'm better at handling pain now: better at asking people for help, better at talking about my pain; and even though I've been in a stretch of pain and I need to spend most of my free time in a hot bath recently(not all it's cracked up to be), most of my days are happy. This project365 helps. But being better at handling pain is also kind of sad. I'm a sadder person than I used to be. I try not to think about it. I try not to think of the happiness I miss out on because while everyone at the table is talking and laughing, half of my brain is focused on the pain in my back. I try not to think about all the things I miss, sitting at home with an ice pack. I try not to think about how much work my life is going to be if this keeps up. And most of the time I can successfully push that out of my mind, because despite all the things I'm missing, I have a lot. 4. A lot, like: Jim. And the fact that we're getting married! It's probably a random thing that you already knew, with me blabbering on about it all the time, but... woo hoo! It's going to happen in an old grain mill that was built in 1877. We're hoping that means good things for the longevity of our marriage. 5. I'll be changing my name to Robin Lynn Salant. I think. If I can stop hyperventilating over losing the name Robin Lynn Damstra. My nickname will remain Bean. 6. I've never had an intimate relationship before Jim. With anyone. Not to say that I don't love my family, my friends, or that I'm not close to them. But I've never had a relationship with anyone where we talk about everything. I'm not an open person. When I was single in college, I could go days without talking to anyone, save for answering questions in class (Oh, I'm also a big dork; I guess most introverts are.) Jim's like that too, but not always. With the people he loves, he's a sharer. Relentlessly. I used to think I wouldn't be able to handle all that emotion. But it's starting to come naturally now, after hours and hours and hours of long discussions on the topic (I've found that long discussions on practically everything is a product of being raised, as Jim was, by psychoanalysts). 7. I'm one of those people who feels like she can understand the thoughts, motivations, and emotions of her animals. And I swear, I'm usually right. ;) 8. Jim and I have grand plans of a traveling life around the world, experiencing each stop for only a limited time. But we've been living in Stockton, NJ, for over two years now, and it gets better all the time--the people, the food, the countryside. It's a bad place to live when you are young, and in love, and the world is your river-oyster because, when we travel, we're often disappointed. But we loved Savannah, and we're going back in February to check it out again. 9. I have a bone to pick with people who are vegetarians for ethical reasons and who eat cheese and eggs from factory farmed animals. It's beyond ridiculous and, in my opinion, so damn pretentious. 10.I would rather have quiet than background music. If there is background music, I'd prefer classical. Jim says I should keep that one secret. big

This Young M.a Relationship - 9-10-things- on net.photos image has 1024x783 pixels (original) and is uploaded to . The image size is 118622 byte. If you have a problem about intellectual property, child pornography or immature images with any of these pictures, please send report email to a webmaster at , to remove it from web.