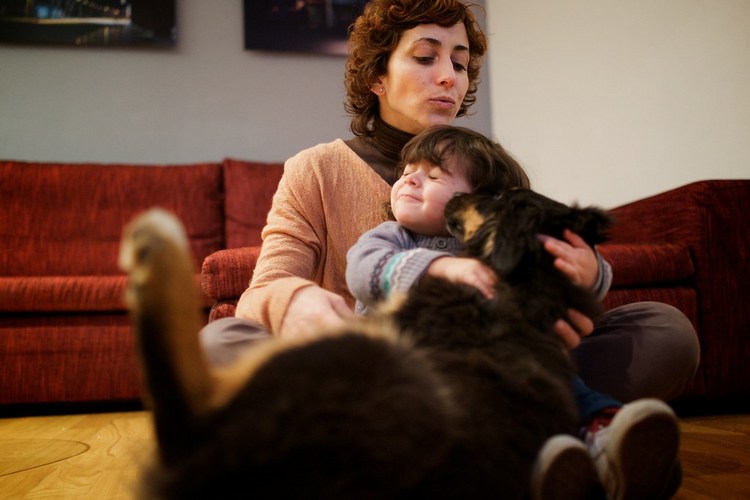 Day Three-Hundred and Forty Four, "Meet Shadow" theme, tenth shot. How much love can a dog bring to its new family? Quite a lot, actually, since dogs seem to be basically made for bringing love to their human families. Especially puppy dogs. Did our family need more love to be brought in? Well, the short and cheesy answer would be "yes, cause there's not such thing as too much love". The long and honest answer, however, sounds more like "it didn't, there was plenty of love to sustain our family, if it wasn't for the black hole left by Lucy's death and the fact that the hole was dangerously enlarging". So, love to fill a black hole... I'm not talking about my personal black hole, which I know I'll bring to the grave with me cause I can't in a million years forget the last hours with (and of) Lucy. How I cuddled her in that vet's cage till her eyes showed only love and serenity, and then how I saw those same big brown eyes opening wide to the eternity when the opium flooded her blood, and how those eyes got suddenly and irremediably emptied when the drug stopped her old heart. Those eyes which stared at me with love and trust from the very moment we met, till the last second of consciousness she had, till she could stare at something. This is a black hole that no new puppy or anything will ever fill. But I'm a big guy, a grown up, a husband and father, I know I have to cope with it, it's part of life. So I'm coping with it and I'll cope with it. The unexpected hole, the one I couldn't sustain, was the one which teared apart my daughter's heart. Unexpected because Lucy was so old and shy that no real relationship between the two of them ever built. Unexpected because Agata was just two years old when Lucy died, and very prone to forgetting people she didn't see for a while. The last time Agata saw Lucy was the day I brought the dog to the vet because she was walking funny. Lucy never got back from that trip. We told Agata that the vet had us bring Lucy back to her mum and dad because she was sick and needed her parents to take care of her. Agata bought it and for a while she was fine. While we were waiting for Lucy to fade in Agata's memory, our daughter kept asking how Lucy was doing on a daily basis. Until the day came. The day the memory became a sorrow for Agata, and I decided she really needed a dog to move on and replace that sorrow with happiness. I'll get to that day. But not today. 365 Days of RX1 - one camera, one lens, 12 projects www.lucarossini.it/category/365-days-of-rx1/ www.lucarossini.it www.facebook.com/LucaRossiniPhotographer

This Young M.a Relationship - 344-365-meet-shadow-nr-10 on net.photos image has 1024x683 pixels (original) and is uploaded to . The image size is 97963 byte. If you have a problem about intellectual property, child pornography or immature images with any of these pictures, please send report email to a webmaster at , to remove it from web.