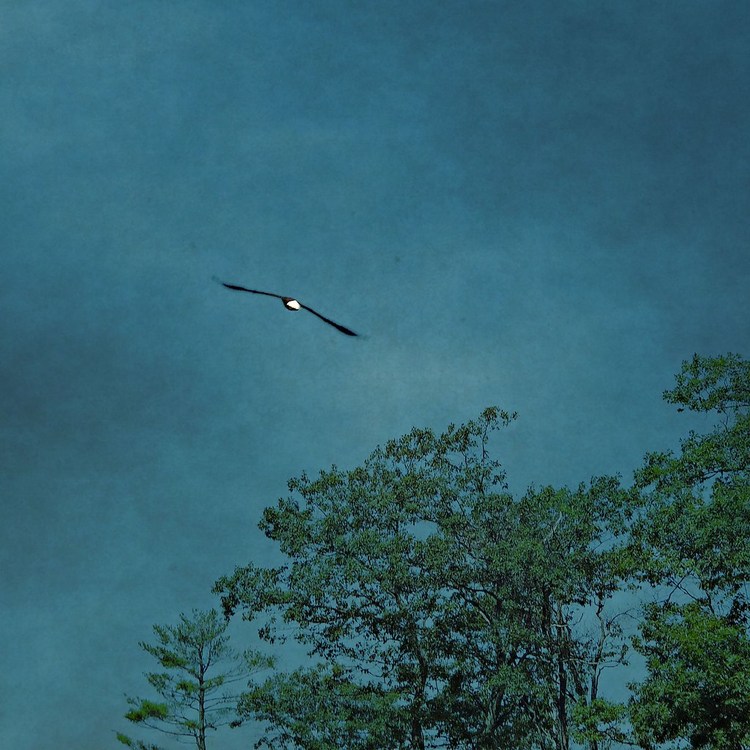 A perfect day of 80F/26C and not a cloud in the sky had me out in the canoe for an extended period yesterday, a portion of which had me gazing at eagles who apparently considered it lovely as well. While I can't say I'm a big fan of the feeding habits of these raptors, opportunistic feeders and scavengers who are known to prey on the eggs and young of other species (including my loons), I admit to feeling a distinct sense of awe in just looking at the size of them. They certainly create a presence. While I often see individuals perched in spots around the lake, it is rare to see them playing as they seemed to be yesterday, alternately swooping and soaring in an acrobatic aerial display. Far above the adults, a youngster viewed the scene from altitude. The first comment photo catches a bit of this, and suggests their size in relation to fully grown shoreline trees. The second comment photo shows an individual just taking its leave upon my approach... probably as close as I've gotten. The lead photo is a more stylized (artsy) image of the departure, chosen as the feature specifically for the composition All obviously have a texture applied to give some interest to the "bluebird" sky. The display of the eagles (and now the osprey) is one of the few times that I truly wish I had a better camera...but that would mean I would have to learn how to use it...;-) However, with all the mediocre to bad eagle shots I have in my archives, it would be nice to have a series of good ones...for their sake as well as mine.

This Young M.A - with-eagles on net.photos image has 1024x1024 pixels (original) and is uploaded to . The image size is 222476 byte. If you have a problem about intellectual property, child pornography or immature images with any of these pictures, please send report email to a webmaster at , to remove it from web.