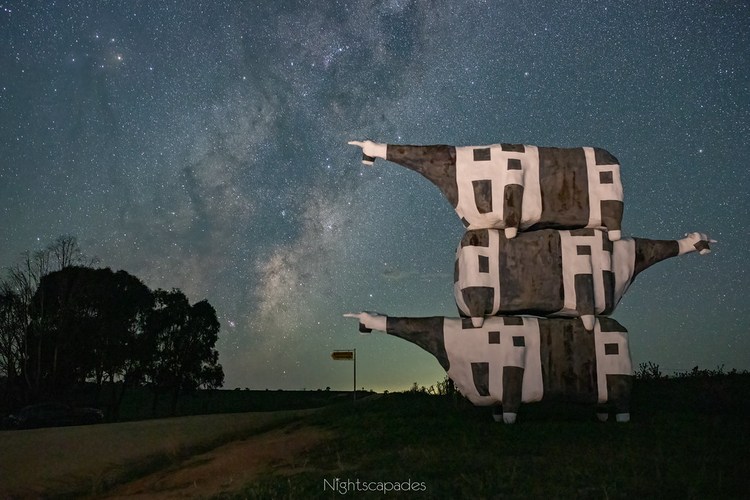 It's likely that Geoff Sharpe and I both had a chuckle at the irony of cows staring at the Milky Way as it rose east of Harden, NSW, Australia, when we lurked in the darkness with our cameras back in February. Cows->Milk->Milky Way. I'm a dad-joke tragic, apparently, so passing up that exercise in word-association wasn't going to happen. I've mentioned previously that the Australian artist, John Kelly, is famous for his sculpture known as "Three Cows in a Pile". This installation of Mr Kelly's iconic work marks the access to a major pastoral company's farm in the Harden area and is one of the least-likely landmarks you'd expect to find on a dirt road in the country. The galactic core area of the Milky Way is always an impressive natural wonder to see and photograph, so it's no wonder the cows couldn't help but gaze at it, too. I used my Canon EOS 6D Mk II camera to shoot this single-frame photo, coupled with a Sigma 35mm f/1.4 Art lens @ f/2.8, using an exposure time of 15 seconds @ ISO 6400.

This Young M.A - got-milk on net.photos image has 1024x683 pixels (original) and is uploaded to . The image size is 190838 byte. If you have a problem about intellectual property, child pornography or immature images with any of these pictures, please send report email to a webmaster at , to remove it from web.