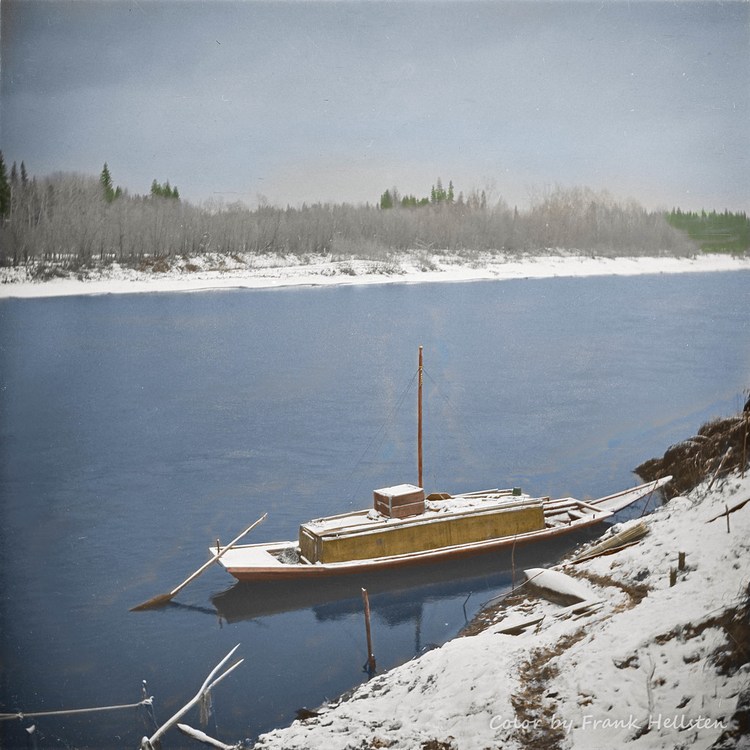 A traditional Siberian boat used by inhabitants of the Ket River area photographed in the fall of 1912 by the Finnish linguist and ethnographer Kai Donner. The image in the Finnish Heritage Agency archive is here shown digitally hand painted by me. "Though serpentine and relatively small, the Ket River was once part of a significant thoroughfare in Siberia. After the construction of a canal in the late 19th century, it served as a corridor that linked two of Russia’s biggest river basins, the Ob and Yenisey. By the early 1900s, west-to-east traffic in the region — including farmers, traders and Tsarist troops — had begun to rely on the railway. Fewer and fewer travelers needed the Ket." (Emile Ducke, NYT) "Kai (Karl) Reinhold Donner (April 1, 1888 in Helsinki – February 12, 1935) was a Finnish linguist, ethnographer and politician. He carried out expeditions to the Nenets people (Samoyeds) in Siberia 1911–1914 and was docent of Uralic languages at the University of Helsinki from 1924. He was, among other things, a pioneer of modern anthropological fieldwork methods, though his work is little known in the English-speaking world. Donner was the son of professor (later senator) Otto Donner, himself a noted philologist. Kai Donner studied Finno-Ugrian philology at the University of Helsinki from 1906. In 1909, he studied at Cambridge under James Frazer, A.C. Haddon, and W.H.R. Rivers at the same time as his better-known contemporary, Bronisław Malinowski. Studying the Finno-Ugrian peoples of Siberia had become an important part of the "national sciences" — Finno-Ugrian philology and ethnology, folklore studies, and archaeology — that arose in answer to the interest in national "roots" that followed the "National Awakening" of the mid-19th century. Kai Donner had decided early on that he wanted to follow in the footsteps of pioneer philologist and explorer M.A. Castrén (1813–1852) and study the peoples who lived beyond the Urals. On his first trip (1911–1913) he traveled along the upper reaches of the Ob and most of the Yenisei. His second trip took him to the Ob, Irtysh, and upper Yenisei. Living with the Nenets and Khant people, Donner studied not only the language but also the way of life and beliefs of his hosts. His travelogue, "Bland Samojeder i Sibirien åren 1911-1913, 1914" ("Among the Samoyeds in Siberia in the years 1911-1913, 1914"), was first printed in 1915. During World War I, Donner was active in the Finnish independence movement which was secretly sending young men to Germany to receive military training in preparation for an armed struggle for independence from Imperial Russia. Betrayed to the Okhrana in 1916, he fled to Sweden and lived there and in Germany as a refugee until 1918. During the Finnish Civil War, Kai Donner served as General Mannerheim's aide-de-camp." (Wikipedia)

This Young M.A - a-traditional-siberian-river-boat-11912- on net.photos image has 1023x1023 pixels (original) and is uploaded to . The image size is 231539 byte. If you have a problem about intellectual property, child pornography or immature images with any of these pictures, please send report email to a webmaster at , to remove it from web.