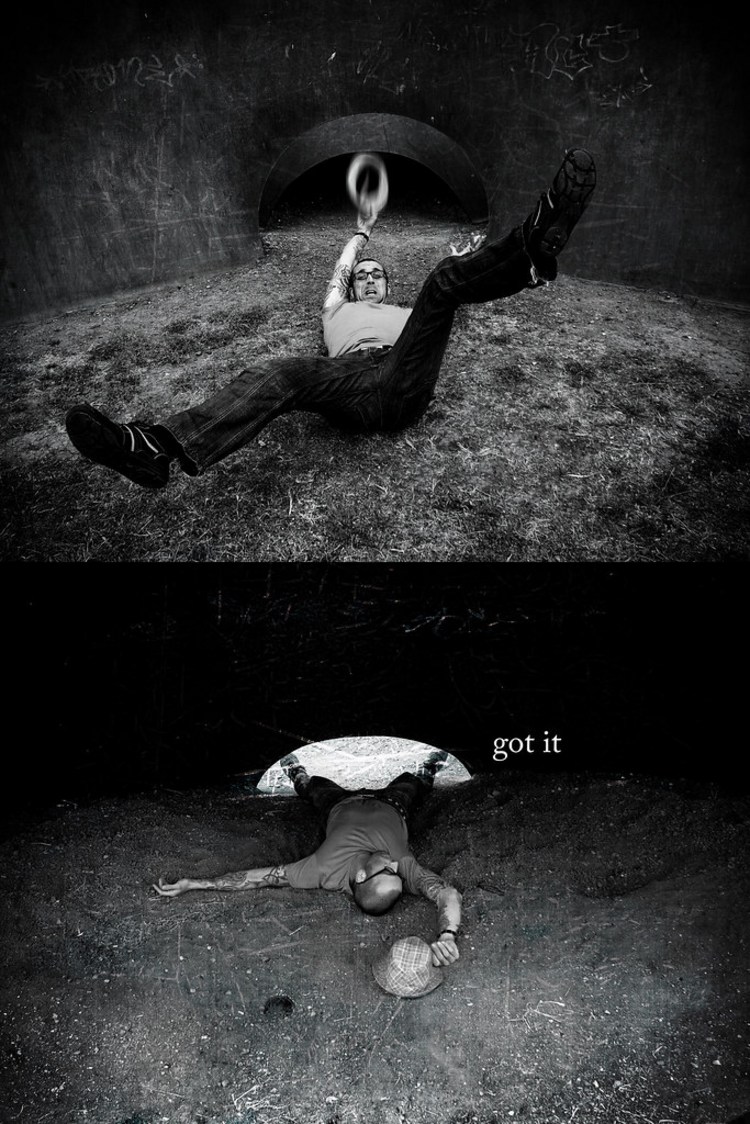 For TOTW: Tiny Words For tHe VeNt: Anything but blood? I love you Jamie. I was always slim and quick and was born with reflexes of a cheetah. I was (and still am) rather athletic in my inborn attributes. Lucky me? Not really, I don’t fit in with jocks, I’m a weird artist!!! But… I tried to fit in to this mold as a young kid. My mother constantly put me into different sports. One of my worst memories was when I was put in Little League around the age of 11 or so. I was really good in “training camp” so they put me in the “big” league with all the big kids. Turns out, I couldn’t hit the fucking ball. Actually it turns out later in life I couldn’t SEE THE FUCKING BALL because I am legally blind without glasses on. But I didn’t know that at the time. But they don’t check to see if you can hit the ball during their training camp, they only check to see if you are athletic. So I spent the entire year on this team. Quickly I was recognized as someone that couldn’t figure out where the ball was. Strikeout after strikeout. It was totally embarrassing. And get this – I went the ENTIRE FUCKING YEAR WITHOUT A LOUSY HIT!!! I was the joke of the entire team. I was used a little as possible. I would be used as a pinch runner to steal a base, which I always did. But hit the ball? Haha that would be like asking pigs to fly. So on the LAST GAME of the year on the LAST AT BAT of the year, my coach realized he hadn’t used me. Our team was down by an amount of points I don’t remember. But I do remember going to bat. And I remember the opposing coach snickering in the other dugout talking to someone saying “WE GOT THIS IN THE BAG THIS KID SUCKS!!” Now I don’t know if he said that, but I could see his whisperings and I wouldn’t be surprised if he was saying something like that. So I go to bat. Last at bat of the season. NOT A HIT ALL YEAR!! My team is down. I’m a tiny kid. Feeling like a piece of horseshit inside a colon of a horse. They throw me a few pitches. Ball, strike, ball, strike…. Then it happened. (I AM NOT MAKING THIS UP). They throw me a pitch. I HIT THE BALL!!!!!!!!!!!!!!!!!!!!!!!!!!!!!!!!!!!!!!!!!!!!!!!!!!!!!!!!!!!!!!!!!!!!!!!!!!!!!! I will never forget it. It was so weird because I never made contact before. The bat stung my hands from the vibration of the metal bat, it hurt so badly. But I just started to RUN like Forest Gump around the bases. I almost got to second base and everyone is just standing around. The shortstop goes to me: “Uh, It was foul” (sort of laughing). I stand there rejected feeling EVEN MORE STUPID than before. I walk back to the plate rejected dumb and retarded for running so far on a foul ball. My hand hurts like hell. Next pitch? Strike three. Your out. Game over. Next year? Yeah, I got glasses. Little league sucks monkey balls. June 1st, 2009 *=lapse

This Young M.A - 365-day-178- on net.photos image has 683x1024 pixels (original) and is uploaded to . The image size is 231702 byte. If you have a problem about intellectual property, child pornography or immature images with any of these pictures, please send report email to a webmaster at , to remove it from web.