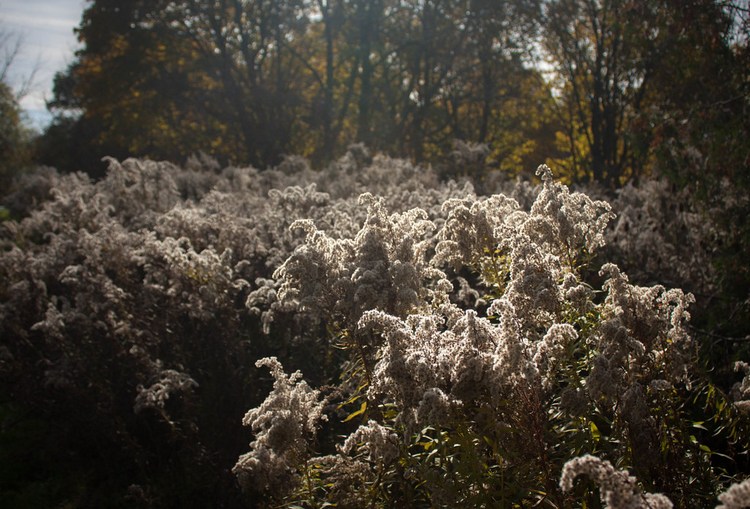 I'm a writer first. One week ago I started a new practice of going outside every day for at least an hour to observe and record in words. I have been leaving the Canon DSLR home, otherwise looking for photos distracts me too much. This new habit was inspired by a webinar I attended last week given by Canadian novelist Helen Humphreys who answered questions on her new non-fiction book, Field Study. She said she walks for an hour every day in the woods near her home. I envied her. There's no good excuse for me not to do the same. It has gone really well so far. Seven days of unaccustomed splendid fall weather haven't hurt my ambition. Putting observation first really helps. Without thinking of it as exercise, I look forward to walking and get a lot more exercise, which is of course not the point, but a side benefit. I have successfully tricked myself by reframing it as field study. I shouldn't be telling you this secret. Don't tell me. To celebrate one week of dedication, today I took the camera. That was alright. Without the macro lens it was light enough to be comfortable, easy to forget about. Taking the macro lens wouldn't have worked. My body has adjusted to the routine of covering some distance. It wanted to keep moving. Mostly I stopped to take better photos of things noticed previously. So I only needed to pause briefly, then move on. In fact I walked further than any of the previous six days and stayed outside longer, almost 70 minutes. One interesting point, at least to me: I noticed different things because of having the Canon instead of just the Smartphone. I noticed more things related to human habitation and activity, things my eyes consider photographing, but I don't often contemplate or make notes about them. Without the camera I wouldn't have stopped to study the light on a house or a frostbitten rose. This insight is useful in itself. I don't mean to leave civilization out of the details I record. However, I can think of several human activities in the past week that I did not write down, for example a hose draining someone's swimming pool into the street. It's not "nature," but it is interesting. I will adjust my practice. Leaving the camera home most days is still a good practice for now. However I'm pleased to have a set of five Canon photos to share today (possibly more later). The Smartphone misses some detail and can't grasp subtleties of light, like in this image of goldenrod gone to seed, which I passed every day at around the same time, but couldn't do justice to it. Thank you to everyone who visits, faves, and comments.

This Words That Mean Successful - dream-of-goldenrod on net.photos image has 1024x695 pixels (original) and is uploaded to . The image size is 257299 byte. If you have a problem about intellectual property, child pornography or immature images with any of these pictures, please send report email to a webmaster at , to remove it from web.