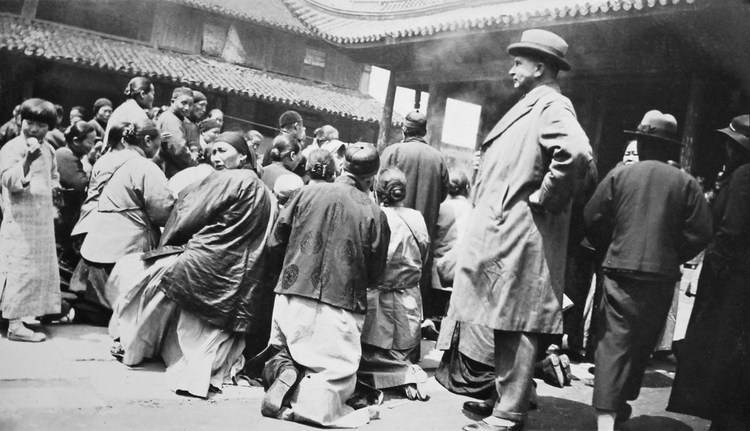 Sometimes, a photo gives me an uneasy feeling; this is one of them. The man's attitude is not sympathetic to say the least. The woman looking backwards is not appreciating the photographic attention. Several foreigners in China had a racist approach to Chinese. Belgium cartoonist Hergé showed examples in the adventures of Tintin, "The Blue Lotus". en.wikipedia.org/wiki/The_Blue_Lotus "The Blue Lotus (French: Le Lotus bleu) is the fifth volume of The Adventures of Tintin, the comics series by Belgian cartoonist Hergé with aid from Zhang Chongren. Commissioned by the conservative Belgian newspaper Le Vingtième Siècle for its children's supplement Le Petit Vingtième, it was serialised weekly from August 1934 to October 1935 before being published in a collected volume by Casterman in 1936. " "In creating The Blue Lotus, Hergé exhibited a newfound emphasis on accuracy and documentation in his portrayal of foreign societies. He was heavily influenced by his close friend Zhang Chongren, a Chinese student studying in Belgium, and the work both satirises common European misconceptions about China as well as criticising the actions of the Japanese invaders. The Blue Lotus was a commercial success in Belgium and was soon serialised in France and Switzerland, while news of the book led to the Chinese political leader Chiang Kai-shek inviting Hergé to visit China itself. " "Hergé actively satirised typical European opinions of China in The Blue Lotus. He had Thomson and Thompson dress in what they perceived as traditional Chinese costume, as Mandarins, only to stand out in stark contrast to the actual clothing worn in China. He also had Gibbons, one of the story's antagonists, express racist attitudes toward the Chinese, and made Tintin give a speech to Chang explaining western misunderstandings of the Chinese. He took "a radical view" by expressing a criticism of Western activity in China's International Settlement, depicting it as extremely corrupt and only interested in its own commercial interests. He gained much of his information on such issues from Zhang, who informed him of the political events occurring in China from a Chinese perspective." Charles Gesner van der Voort (1916-1991) was part of a group of Dutch bachelors in pre-war Shanghai. Another member of this group was David van Gelderen (1908-1990), originally from Rotterdam. He arrived in Shanghai in 1933, working for Unilever, a merger of the operations of Dutch Margarine Unie and British soap maker Lever Brothers. The photo albums of his China years contain many photos of the bachelor life in those days: travel, work, parties, trips within China and to Japan. They also include photos of the bombing of the Unilever factory during the 1937 Japanese attack of Shanghai, membership of the French Special Police and other unique photos. Like Charles, David was interned in Chapei Civil Assembly Centre by the Japanese from 1943 to 1945. Being Jewish, internment in Shanghai probably saved David’s life; since all of his family members in the Netherlands were killed by the Nazis. David married, had two children and continued to work for Unilever. He became member of Nederlandse Reünisten Vereniging China (NRVC, Dutch Reunists Association China). This photo shows Mr. Plaisir, who seems to have been one of David van Gelderen's business contacts. A religious event outside a temple seems to take place. Courtesy Van Gelderen family archives

This Woman Within Clothing - mr-plaisir-en-chine on net.photos image has 1024x589 pixels (original) and is uploaded to . The image size is 151020 byte. If you have a problem about intellectual property, child pornography or immature images with any of these pictures, please send report email to a webmaster at , to remove it from web.