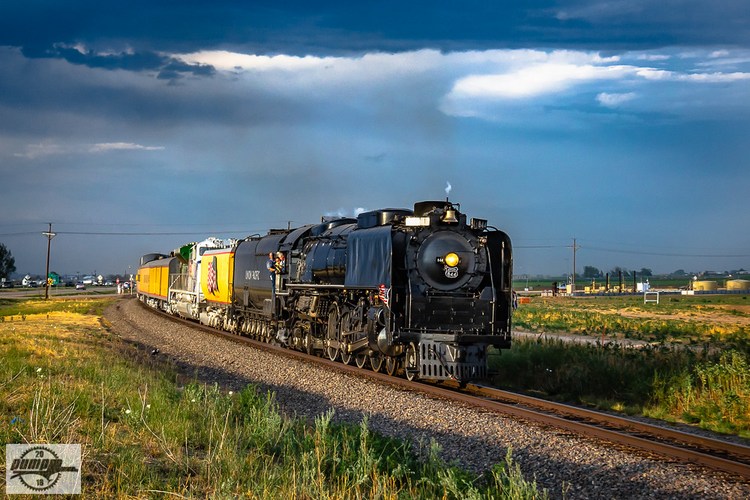 The sun peeks between a couple clouds just north of Platteville at MP 37 giving us a spectacular view of UP Train PDVDV1 21 making its way south to Denver with the 2018 "Cheyenne Frontier Days Special" at track speed of 60 MPH. The elated mood shared by Melanie and I after being fortunate enough to get sun here was short lived, however. 23 minutes later at Henderson, MP 14, a woman was struck and killed by the engine while taking photos of the train south of 124th Street at 7:45 P.M. Mel and I were next to the train on US Highway 85 slowly getting back ahead for a shot at Commerce City. We were next to the 6th car of the train when I heard the emergency brake application; then the radio traffic started. My wife is a former law enforcement officer and is the supervisor for a 911 emergency communications center in Kansas City for a county on the edge of the metro area; I'm a railroader with a transportation background. Without hesitation we turned around on 85 and raced back to the crossing in an attempt to render any aid we could. It was immediately apparent upon our arrival that she did not survive the impact and was laying to the southeast side of the crossing. We were the first on scene aside from the four people that had actually seen the impact; a couple and their 13 year old son, and another gentleman that had been located to the victim's south. All of the other spectators at the crossing were still on the north side, looking for coins they'd placed on the track still unaware of what had happened. I parked my truck in a way to hide the view from the north, mainly so the children present wouldn't see the body. Melanie and I began making contact with witnesses at this time and attempting to calm them--she possesses various national certifications for critical incident counseling and support. I also encouraged a few curious passengers on the rear car to stay inside the "Cheyenne" and keep away from the windows--the rear car had stopped just past where the victim was laying. The head end of the train stopped short of 120th Street. Under our direction, a handful of people on scene began turning traffic around on 124th Street and sealing the scene from the onlookers that were attempting enter. Emergency response was quick, within 5-7 minutes EMS, fire, and police were on scene to begin the investigation. Kelly Yarish, 56 of Brighton, CO was pronounced dead at the scene. The 700 passengers aboard were bussed from this location back to Denver starting about an hour after the incident, and the train returned to North Yard about 0200 on the 22nd. The "UP Museum Special" operated the next day as planned with the passenger equipment, but behind UP 1943 and another diesel. UP 844 returned to Cheyenne at the head of a short freight train the following Monday. This was an unfortunate scenario for our entire community as railroaders and railfans. We've all seen careless behavior around trains, especially steam locomotives which always draw a crowd. Something like this has always been in the back of our minds whether we'd like to admit or not. I always figured it would be something I read about well after the fact. I'm thankful we were in a place that afforded us a fast arrival to the location, and I'm particularly glad I married a woman that happens to be trained in dealing with this exact scenario from an emergency response and management background. She went into first responder mode instantly and without hesitation. While the woman was killed on impact and there wasn't any first aid to give, we were able to control the scene from being heavily populated by unrelated individuals, and preserve it quickly for the investigation. We were thanked by several of the first responders for our initial actions, and those that arrived were nothing short of courteous, quick, and sympathetic to the other people around the site, including the few on the train that had come forward as witnesses. I can't say enough about how well this terrible situation was handled by them and the railroad. Our heart goes out to the lady’s family, the train crew, and the unlucky passengers who had to witness this unfortunate but entirely preventable incident. Please stay back out of the foul, and please encourage others to do so. We all know as railroaders and railfans; it’s pretty conventional wisdom that equipment overhangs from the rails, but not everybody is familiar with these dimensions and clearances. Steam engines are cool, photography is fun, but no picture is worth losing a life, or witnessing the loss of one. Watch out for people, even if it means being "that guy" that tells people to stay back. You might save a life whether you realize it or not. Locomotives: UP 844, UP 1943 7-21-18 Platteville, CO

This Woman Within Clearance - southbound-up-cheyenne-frontier-days-special-passenger-train-at-platteville-co on net.photos image has 1000x667 pixels (original) and is uploaded to . The image size is 282396 byte. If you have a problem about intellectual property, child pornography or immature images with any of these pictures, please send report email to a webmaster at , to remove it from web.