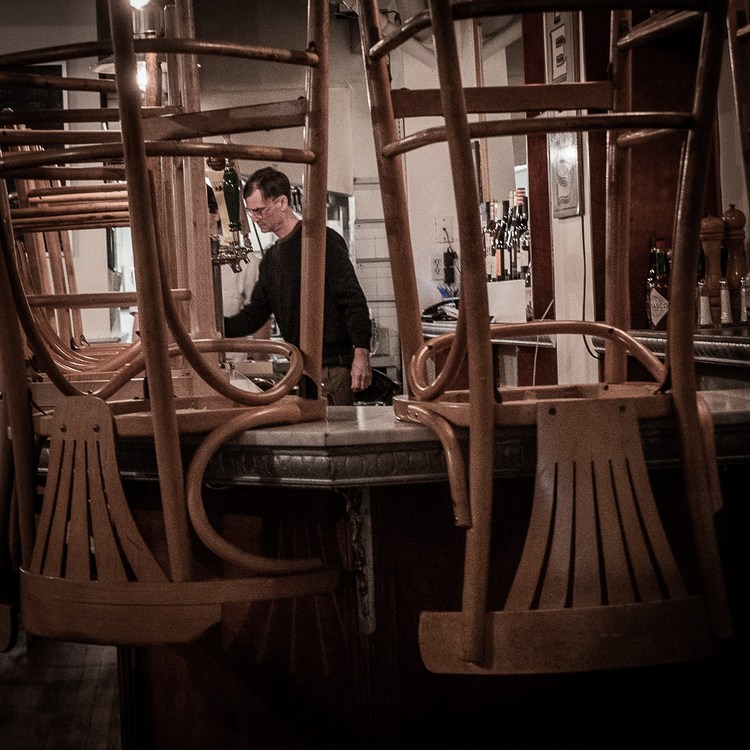 Post #2 March 17, 2020 NYC --Last night around 9, with the uncanny sound of the sheltered-in-place city pressing down on me, I went out to see what New York had become as the shut downs escalated. My Village neighborhood was sad, creepy, a little frightening, and strangely beautiful in a stage-lit zombie-apocalypse kind of way. Cars were scarce, and the few lone walkers, some with dogs, seemed isolated, no longer part of a herd. Delivery bicyclists ruled the wide avenues and swirled down narrow cross streets, seizing the middle of the road and swinging round corners in wide, exuberant arcs. Store and restaurant windows displayed signs, some hand written, all personal, announcing they had closed until further notice, or were open only for take out and delivery and would return some time in the future, when they could. All were we're sorry and worried: We want to protect our staff our customers. The thin haze of fear that overhung the streets felt much like the kind of apprehension that had been normal in the wild, old New York of the 60s and 70s, when a lone walk at night risked interaction with muggers and desperate junkies who had relatively free reign of the downtown streets. The rational fear now is of infection from our fellow humans who might be harboring a potentially deadly virus. (I am somewhat shocked that my age puts me in THE demographic.) But last night, good-old-fashioned wariness also rose up, like urine smells in the summer subway, so that when I heard footsteps behind me, echoing in empty streets, I tensed and gripped my camera more tightly. I took pictures of restaurants, empty except for an occasional worker left inside waiting for a take-out order or cleaning and cleaning again. Staff sat frozen in the solemn light of solitude that had replaced the strobe of retail frenzy. I stopped a few times to talk to people. And unlike normal New York, found quick companionable rapport. I asked a guy with an electric bike hauling a trailer filled with black and yellow plastic crates what he was doing. Delivering for Amazon, he said. And he liked the work. "It pays $15 an hour, no one is looking over my shoulder" as he rides, and he loves to be on the bike. “It’s a good way to kill time,” he said. “Now the streets are empty and people are really grateful and glad to see me. He was young and sweet and didn't seem to be in a particular rush. An elderly lone woman on my block said she'd lived in New York all her life, and this was the strangest time—stranger even than after 9/11. We talked about how, then, you could smell death in the air coming from downtown. "Yes," she said, "it even coated the windows. But this is stranger yet." Starting to feel increasingly lonely and creeped out, I climbed to my 5th floor studio walk-up where Hooligan my cat waited to be fed, and the world was safe —unless, of course, the virus was already there, inside me. And indeed, my throat felt a little strange, my chest a little tight. It was so like all the apocalypse films you've ever seen, and yet here it was.

This Woman In The Window Trailer - restaurant-worker_covid-19-nyc2020-03-16_ta1_11866 on net.photos image has 960x960 pixels (original) and is uploaded to . The image size is 298837 byte. If you have a problem about intellectual property, child pornography or immature images with any of these pictures, please send report email to a webmaster at , to remove it from web.