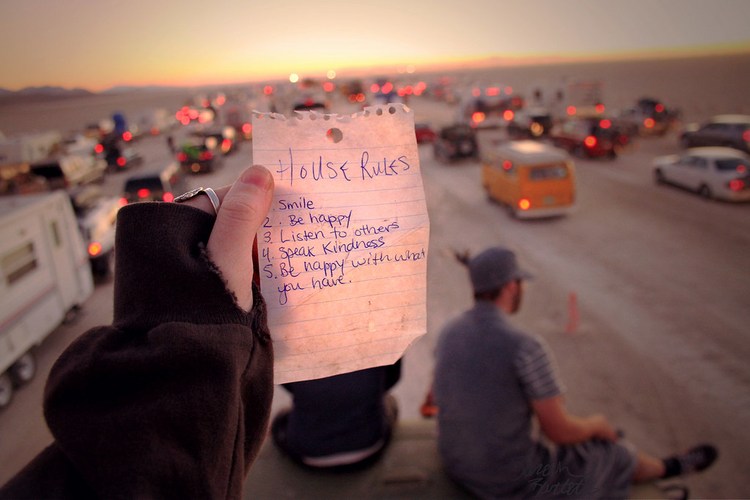 I'd been alseep on the bus for what seemed to be only an hour, curled up beside Jake with Ashland the mountain lion draped over my body like a blanket. I'm sure the cars passing by nearly veered off the road if they saw it and didn't realize that it was just taxidermy. We got honked at a lot, though that probably had more to do with the fact that we were driving a HUGE bus with "NOW IS ALL YOU HAVE" printed proudly across the side, with "ON TO BURN NOW" written in duct tape on the back trailer. By the time we'd slowed down enough for me to realize the change in motion, we were nearing the line to enter Black Rock City. It was about 4:00 in the morning, and the sun was about to rise over the peaks of the mountains in the distance, lighting up the edges of the horizon behind them, leaving them back-lit and black as ever. The only other light on the scene came in the form of a great yellow-and-red snake, moving slowly through the valley on its way to the Playa. These, of course, were the thousands and thousands of cars which had, like us, made the vast pilgrimage to Burning Man. Though I hadn't gotten much sleep, I was excited. My cousin Marty, a veteran Burner, had explained that the wait was like one big party, and indeed, there was an energy in the air that seemed excited, calm, and utterly happy all at once. I wanted to go out and explore, so I put Ashland the mountain lion on my head, and Danny donned a gigantic tea pot costume (think Disney's Beauty and the Beast). Then the two of ran up and down between the rows of cars, shouting, "Tea time in ten minutes!" and asking people with their windows down if they "Fancied a spot of tea?" It was a riot of laughter. At last, as we inched forward, the sun began to rise over the black mountains in the distance, and Danny, still wearing the tea pot costume, turned to me, still wearing my mountain lion, and nodded toward the mountains. "Race ya?" he suggested jokingly. But I raised an eyebrow at him, and suddenly, both of us had begun a mad dash between the cars, under the boarder fence, and off across the wide open Playa, out-of-bounds, toward the mountains, which only seemed to grow smaller the closer and closer we got. Finally, we both realized that it was a fruitless effort and turned back, much to the disappointment of a cheering crowd. Back in line, Danny and I climbed atop NIAYH's sister bus, aptly named "Swamp Thing" due to the unsightly drab green and rust orange paint job. A few others from the group joined us, and we sat there, passing around a bowl of weed and a few bottles of beer to pass the time. Several people walked by and gave me compliments on Ashland, asking if it was real and where I got him and such. I was impressed that no one had given me any snide remarks yet, but Marty had told me that it wasn't in the spirit of Burning Man to pass judgement without asking questions first, and thus far, no one had had any issues with the origin of the pelt. I was pleased. One woman even told me that it was the most awesome costume she'd seen at Burning Man in over ten years. I laughed an merely reminded her that there was a whole week ahead in which to find a more extravagant outfit than mine. She smiled then and handed a little note to one of the young men sitting on Swamp Thing's hood. "I found this. Pass it on!" and she left, disappearing into the rows of cars. When the note finally got to me, I smiled and had to photograph it.

This Woman In The Window Trailer - burning-man-house-rules on net.photos image has 1023x682 pixels (original) and is uploaded to . The image size is 132726 byte. If you have a problem about intellectual property, child pornography or immature images with any of these pictures, please send report email to a webmaster at , to remove it from web.