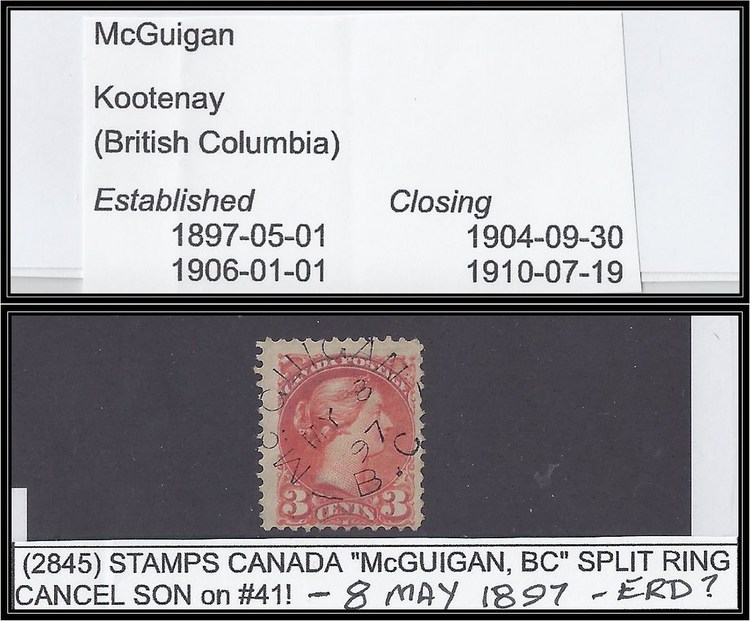 - from 1908 "Lovell's Gazetteer of the Dominion of Canada" - McGUIGAN, a post office in Kootenay District, B.C., and a station on the Kaslo & Slocan Railway, 23 miles from Kaslo. McGUIGAN - This stop on the Kaslo and Slocan Railway, also known as McGuigan Station and McGuigan Siding, was named for John George (Jack) McGuigan (1858-1901), one of the group who staked the Noble Five and other claims on Payne Mountain at the start of the Silvery Slocan rush. According to Don Blake in Valley of the Ghosts, “When the K&S put their line through to Sandon in 1895, they put a siding in at McGuigan Creek and called it McGuigan’s Siding, later dropping the S.” McGuigan appeared on the first K&S timetable, dated Nov. 25, 1895, and was also mentioned in the Victoria Daily Colonist of March 19, 1896: “On Wednesday a gang of snow shovelers on the K&S railway got up on the snow bank at McGuigan siding to allow the Sandon express to pass.” The name is no longer widely used, although McGuigan Creek — which appears on Perry’s Mining Map of 1893, remains on the books. The map also shows McGuigan Lake, first mentioned in the Ainsworth Hot Springs News of July 27, 1892: “A.S. Farwell is now surveying a townsite at McGuigan lake, close to the Washington.” (This obscure townsite was named for another member of the Noble Five. We’ll get to it later in this series.) McGuigan Lake isn’t an official name, however. Jack McGuigan hailed from Edwardsburg, Grenville County, Ont. Several of his siblings came west, including elder brother Thomas, who was also involved in early mining in the Slocan. Jack met a bitter end: in 1901 he fell from the fourth storey of the Imperial Hotel in Portland and fractured his skull. Although initially expected to recover, he died in hospital a week later. He’d gone to Oregon about a year and a half earlier to develop a gold property. His mother dedicated a window in his honour at St. Joseph’s church in Spokane. This article was written by - Greg Nesteroff for the Nelson Star newspaper. An application for a post office at McGuigan was filed on Oct. 6, 1896. It opened May 1, 1897, closed in 1904, reopened in 1906, and closed again - 19 July 1910. LINK to a list of the Postmasters who served at the McGUIGAN Post Office - www.bac-lac.gc.ca/eng/discover/postal-heritage-philately/...; - SON strike - / McGUIGAN / MY 8 / 97 / B.C. / - split ring cancel - this split ring hammer (A-1) was not listed in the Proof Book - it was proofed c. 1897 when the Post Office first opened - (RF E / now RF D). The McGUIGAN Post Office had only been open for eight days - Is this the ERD for this hammer? The first Postmaster at the McGUIGAN Post Office was S. Gintzburger who served from - 1 May 1897 to 13 May 1898. The Post Office was located in his General Store at McGuigan. He served on the executive of the Arts, Historical and Scientific Society for several years, and during his term of office was instrumental in securing a permanent exhibition of postage stamps for the Museum. Stamp collecting being one of his pet hobbies, he was the first President elected to the British Columbia Philatelic Society, serving a term of two years and refusing nomination for a further term. (from "The Nelson Economist" newspaper - 12 January 1898) - SHERIFF'S SALE - I will also sell the store of S. Gintzburger, situated at McGuigan, near Sandon, B. C, being two stories high and about 24ft by 50ft, and which is said to have; cost about $1,000. A good title will be given by the K. & S. Railway Company for the sum of $150 to the two lots upon which the building stands. The sale wiill commence sharp at 10 a. m: and the goods will be offered in small lots so that everyone will have ample opportunity to secure what they want. The above stock and building are being sold under execution against one S. Gintzburger, of McGuigan, B. C. Samuel Gintzburger (b. 14 February 1867 in Neuchatel, Switzerland — d. 23 January 1927 (59 years old) Hometown: Vancouver, BC His Life Story - Brothers Samuel and Maurice Gintzburger were both outstanding leaders of the West End Jewish community during the first quarter of the 20th century. Born in Neuchatel, Switzerland to an Alsatian watchmaker, they arrived in Vancouver in 1887 at the age of 20 and soon bought a large tract of 160 acres in what is now North Vancouver. When the orchard of 300 fruit trees that they had planted there failed to support them, they sought other ways of making a living. Maurice found a job with the Oppenheimer wholesale grocers, where he worked for eight years. Samuel, meanwhile, set out on a string of adventures, some more profitable than others. These included: seal hunting, prospecting, mining, and insurance. These pursuits took him to all ends of the province, from the Bering Sea to the Kootenay. As the Jewish Western Bulletin commented in 1958, “He engaged in everything from land sales in North Vancouver to seal hunting in the north Pacific with silver and gold mining thrown in for good measure.” In 1895, Samuel married Rosina Robinson, a charter member of Vancouver Council of Jewish Women and lifetime president of the Ladies Auxiliary of Temple Emanu-El. Three years later, in 1898, Rosina’s sister, Henrietta married her brother-in-law, Maurice. Their only daughter, Pauline, was the first Jewish woman to graduate from UBC. Samuel contributed in many ways to the local Jewish community. He served as long-time president of the young Reform Congregation, Emanu-El, was a charter member of B’nai Brith and the Zionist Society, and co-founded the Vancouver Hebrew Free Loan Association with Solomon Weaver (also buried in Mountain View Cemetery, a few paces away from the Ginzburger plot) and Jacob Fleishman. Samuel also contributed in many ways to the broader community, acting as Municipal council of West Vancouver and Consul-General of Switzerland for BC and Alberta. In this role, he oversaw German-owned properties interned during the First World War. Maurice died on November 3, 1922 at age 55. Samuel, in ill health for some time, died on January 23, 1927 at age 59. LINK to the complete article - admiredlife.com/memorials/1353/life-story

This Woman In The Window Plot - british-columbia-b-c-postal-history-8-may-1897-mcguigan-b-c-split-ring-broken-circle-cancel-postmark-on-small-queen-41-earliest-recorded-date- on net.photos image has 1024x848 pixels (original) and is uploaded to . The image size is 169791 byte. If you have a problem about intellectual property, child pornography or immature images with any of these pictures, please send report email to a webmaster at , to remove it from web.