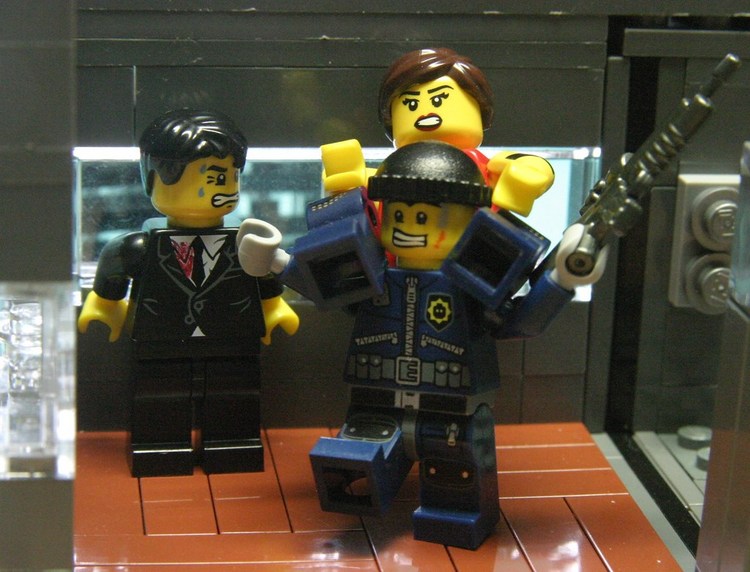 "Don't move, either of you!" The guard demanded, motioning with his gun to move to the one side of the elevator. I leaned against the wall, pain overtaking my body. The woman didn't move, only staring hard at him. "Move over there!" The guard yelled, threatening her with his gun. She smacked the gun out of the way. Two shots rang out, knocking out a few of the small windows in the elevator. She twisted his arm up behind him. Then kicked off the wall somehow ending up on his shoulders. She then rapped her legs around his neck. Then twisted her whole body bringing the guard to the ground. She quickly picked herself, but the guard wasn't moving. "Come on!" She said, grabbing my hand and pulling me out of the elevator and down the hall. ~~~~~~~~~~~~~~~~~~~~~~~ This one was a BLAST to do! I think it has been my favorite so far. :D I had a lot of fun making this pose, it definitely had some Black Widow inspiration. I used hot glue to get the pose. Thanks everyone for looking!

This Woman In The Window Ending - chapter-nine-takedown on net.photos image has 1024x781 pixels (original) and is uploaded to . The image size is 168407 byte. If you have a problem about intellectual property, child pornography or immature images with any of these pictures, please send report email to a webmaster at , to remove it from web.