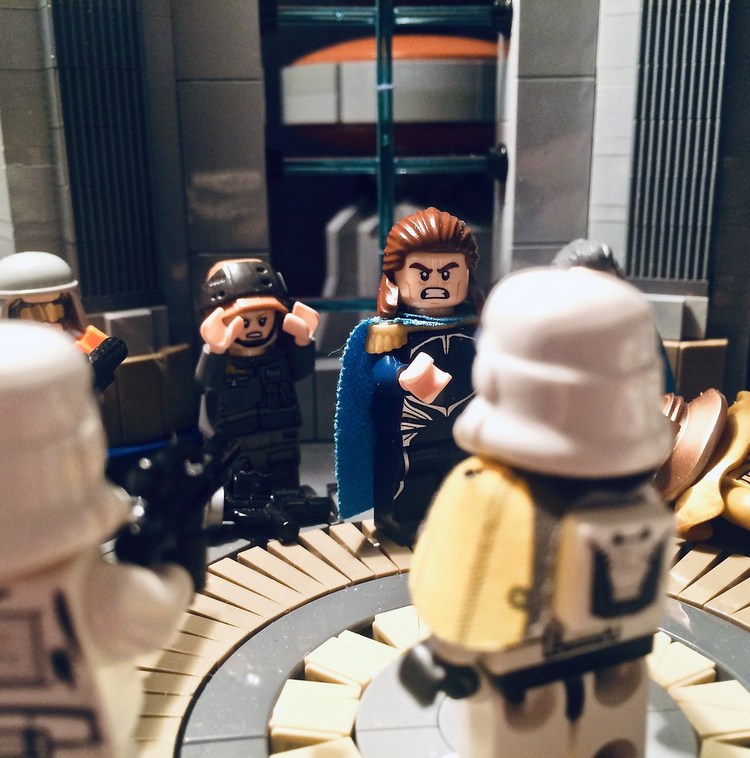 From the mission notes of Ivan Valus After Eriadu, the Empire set about tying up loose ends. Shu-Torun, a world who's allegiances had once been much contested, had been chosen as our next target. Almost immediately after returning from Eriadu, we were dispatched to the volcanic planet known as Shu-Torun. I had heard stories about the last imperial strike against the planet from an encounter at one of Coruscant's many bars. 'Hell' the trooper had called it. Even as we entered the atmosphere, you could feel the sweat start dripping down your neck, the breathlessness that came with the atmosphere of volcanic planets. The ground troops were equipped with cool packs, but we were destined for somewhere else. Moff Geller had received word that there were a small number of Ore dukes gathered in the ruins of the once royally owned Ancestral retreat. We were to hunt them down and execute them, before they could flee this doomed world. The retreat had been abandoned after the last battle, but the building itself was still sturdy. Sturdy enough to shelter any dissidents hiding from the Empire. After we'd disembarked from our shuttle, the Commander led the way. It was a beautiful building, it was almost heartbreaking to see it in such a dilapidated state. Curtains torn from their bearings, holo-frames shattered on the floor. As we made our way through the corridors, I trod on one of the holo-frames. A still image frame, displaying the face of the now deceased Queen Trios. Moving on, we were able to track down the Dukes, huddled in a large room. But they were not alone. As we stepped through the doorway, a guard, dressed all in gold, fired on us. The Commander simply ducked, and fired back, dropping the guard instantly. The Dukes all rushed to the window, their backs to it. For all the good it would do them. "By the orders of Moff Geller, you are all to be executed as punishment for your treachery against the Empire, as well as aiding the Rebelli-" One of the Dukes stepped forward, a man in his fifties, hair flowing over his shoulders. A woman, a rebel, put her hand forward, to try to stop him. He brushed it off and marched right up to the Commander, interrupting him mid-sentence. "How dare you!" He hissed "We have done nothing of the sort, and you have no authority to do this. Do you know who I am?" The Commander stayed silent "I am Baron Corlin, and I demand you stop this immediately. We have no affiliation with this Rebel girl, we are loyal Imperials" "Then why is she here?" I asked. The Baron didn't flinch "She claims she was sent to escort us off-world, that the Empire was coming to execute us, that if we didn't go with her, we would die either way, all lies of course." "Then I guess you should have gone with her" Said the Commander, before shooting the Baron clean between the eyes. The Rebel woman gasped, but remained silent. The ground shook, and we could see through the window that the Spike was becoming increasingly unstable. The woman stepped forward. "Y..you don't have to do this. The Emperor's gone, the Empire is crumbling, please, please don't do this" "Kill them" The Commander said, ignoring the Rebels pleas. We opened fire, gunning down Ore dukes, workers and Rebels alike. All gone in a wave of blaster fire. They were defenceless. No weapons, apart from the guard. One of my greatest regrets that was, that I didn't stand up and say no. For all the good it would have done me. Almost as soon as the last body hit the tiled floor, the other troopers left the room. But not me. I removed my helmet, and for a brief moment I stared out the window, at the Spike of Shu-Torun. What had once brought power and stability to the planet would now be the cause of its destruction. It had been overloaded years ago, and when it blew, it would take the whole planet with it. The Rebels were working to save it, to stop this destruction from occurring. We had been sent to ensure it did. Were we really still doing this? Destroying planets because they wouldn't comply? I cast my gaze over at the Rebel, her eyes still open, frozen in pure terror. She barely looked twenty. Twenty years old, and already she had lost so much. A speck of molten rock flicked through the window and bounced off my armour. I sighed, put my helmet back on, and left the room. Left the bodies to burn with the rest of Shu-Torun ---End of Exerpt---

This Woman In The Window Cast - star-wars-remnants-strike-2-execution-on-shu-torun on net.photos image has 1012x1023 pixels (original) and is uploaded to . The image size is 189594 byte. If you have a problem about intellectual property, child pornography or immature images with any of these pictures, please send report email to a webmaster at , to remove it from web.