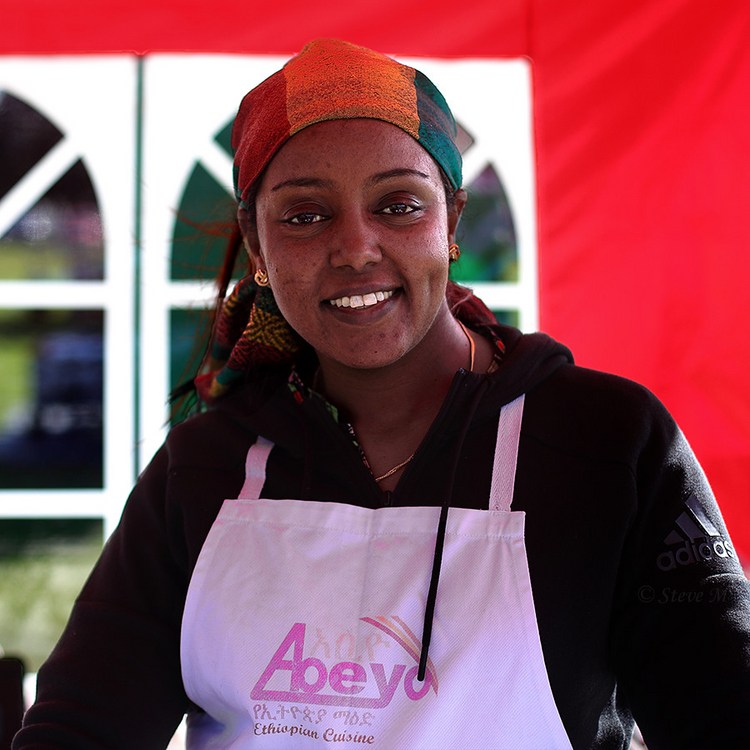 My home village held it’s first Go Green day and I decided to go and see if I could find any people to photograph for my stranger project. Knowing too many of the visitors, I concentrated on the stall holders. Lots of products were on display, organic and vegan foods, recycled items, certified cruelty free goods, the majority of which were classed as eco-friendly and fair trade. Being there close to the end of the event meant a lot of the stalls were beginning to close down as customers were becoming scarce. This made it easy to approach the sellers without having to fit in between shoppers. Meseret was introducing Ethiopian vegan cuisine to the visitors and she told be she’d been having a good day. In fact, two people came and told her how much they’d enjoyed her food whilst I was there and another came back to buy more. Meseret can be found every Saturday at the Sneinton market in Nottingham from 10.00am to 2.00pm. If you’d like to know more about what she offers you can check out her Facebook page here: www.facebook.com/abeyo.abeyo.77 Meseret told me she hopes to open a restaurant in Nottingham in the near future. When not working, Meseret’s spare time is taken up looking after her children, which is something she does not mind at all, and when I asked what is the one thing she couldn’t live without, she said her family. I asked Meseret what her greatest strength was and she said working under pressure. I chose to photograph Meseret where she was as she was just beginning to pack up and close down her stall. The strong sunlight coming through the roof and walls of her brightly coloured tent caused strong colour casts on everything, including Meseret, so I’ve reduced this somewhat in post processing, although some of this redness is still evident in her skin and apron. Taking it out more just caused other casts to be introduced so I left it as it is. Note to self: If wanting to photograph someone who is inside a strongly coloured tent illuminated by bright sunshine try to get the subject to come outside to avoid strong colour casts. Thank-you Meseret for allowing me to photograph you for my stranger project. I hope you like your portrait. This picture is #237 in the 100 Strangers project, yes, I’ve decided to do a third round. Find out more about the project and see pictures taken by other photographers at the 100 Strangers Flickr Group page This is my 208th submission to the Human Family Group. To view more street portraits and stories visit www.flickr.com/groups/thehumanfamily/

This Woman In The Window Cast - meseret-stranger-237-300 on net.photos image has 900x900 pixels (original) and is uploaded to . The image size is 183752 byte. If you have a problem about intellectual property, child pornography or immature images with any of these pictures, please send report email to a webmaster at , to remove it from web.