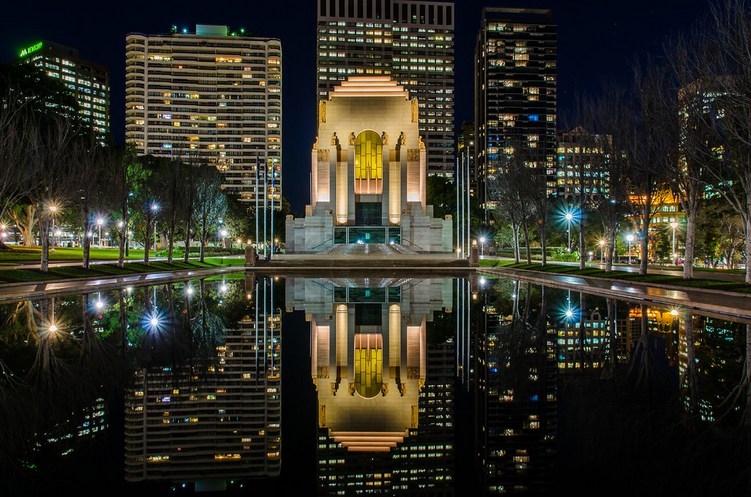 Anzac Memorial, Sydney, Australia. Architect: Charles Bruce Delitt Artworks: Rayner Hoff Background. On 25 April, 1916, the first anniversary of the Gallipoli landing of Australian troops at Anzac Cove, a fund was created to raise money for a permanent memorial in Sydney. By the end of the War the fund had raised 60,000 pounds, and in 1923 the ANZAC Memorial (Building) Act was passed with a decision to erect a monument in Hyde Park. Parliament sanctioned the erection of the Memorial in 1929, and a competition was held for the design of the Memorial and 117 entries were received from all over the world. On 9 July, 1930, the winning design was awarded to Mr. Charles Bruce Dellit, and the following year Kell & Rigby were named the successful building contractors. Delitt, along with Emil Sodersten, the architect of the Canberra War Memorial, were among the leading figures of the Art Deco style in Australia. Construction. The foundation stones were laid on 19 july, 1932, and the Memorial was completed in 1934. Some of the original design had to be scrapped due to the cost of construction. The Pool of Reflection was built when the Sydney Council was granted the use of unemployment relief funds. The Hyde Park War Memorial was officially opened by His Royal Highness, Prince Henry, The Duke of Gloucester, on 24 Nov, 1934. Description. The Memorial is aligned to the north-south axis of Hyde Park. The War Memorial building is on a raised square podium, featuring a circular domed hall that can be approached from wide stairs from either the north or the south. Entrance to the lower level of the Memorial is via east or west entrances. The concrete structure is clad in red granite from the Bathurst region, and the stepped geometric form is typical of the Art Deco style. Concrete sculptures are the main decorative components of the exterior, and on each face of the building is a window with glazed amber cathedral glass. The building’s buttresses are mounted with imposing seated figures cast in artificial stone. On each corner is a standing brass sculpture representing the Australian Army, Navy, Air Force, and Medical Corp. The bronze bas relief panels on the western side illustrate the Australian campaigns on the Western Front, with the eastern panels showing scenes from the Eastern Campaigns. Interior. Enclosed within the main dome is the circular Hall of Memory, and within it the Well of Contemplation leads down to the Hall of Silence. At the central heart of the Memorial is Raynor Hoff’s bronze sculpture ‘Sacrifice’, which portrays a young Anzac soldier lying over a shield & sword. The sculpture symbolises the spirit of courage, endurance & sacrifice, and is supported by three female figures and a child that represents future generations. The ‘Sacrifice’ sculpture is centred in a bronze ring signalling the flames of destruction. The walls of The Hall of Memory are covered in NSW white marble inscribed with the names of the places where Australian defence forces operated. The upper level of the hall is surrounded by a wreath-like carved marble balustrade and is lit via natural light entering the amber glass panels of the main windows. The windows are adorned with the rising sun insignia and the winged torch of liberty. The dome of The Hall of Memory is decorated with 120,000 gold stars representing each man and woman from NSW that served in the First Wold War. Around the walls of the Hall are four niches, each representing the major theatres of war of WWI. On the floor are stones from Flanders, Gallipoli, Palestine, and New Guinea set amongst the rising sun motif. Higher up on the walls are panels depicting the four branches of the Australian Military Service. On the eastern side of the space is the Flames of Remembrance, with its sculpted doorway symbolising the Sword of Sacrifice, and the Rising Sun borne on the Wings of Time. On the western side are marble stairs leading down to the foyer and the Hall of Silence. Facts. Two of Raymond Hoff’s (UK) sculptures, including one of a naked woman were not installed after protests by the Catholic Church. One of the the offending sculptures was called The Crucifixion of Civilisation and featured a naked figure on a cross, that sits atop a pyramid of dead bodies, weapons, helmets and other debris. The poplar trees lining both sides of the Pool of Remembrance symbolise the areas of France where Australian troops fought. Original plans were for a pool on either side of the Memorial, but this was never completed. In 2014, the NSW government approved a $38 million dollar upgrade to commemorate the 100 year anniversary of the start of WWI, including a water cascade at the southern end of the Memorial. The Anzac Memorial was included on the State Heritage Register on 23 Apr, 2010. The War Memorial has been described as the most perfect monument ever built in Australia. Sources: Anzac Memorial website Wikipedia Website Sydney architecture website ABC news website Dictionary of Sydney website

This Woman In The Window Cast - hyde-park-war-memorial-the-pool-of-reflections- on net.photos image has 1024x678 pixels (original) and is uploaded to . The image size is 301440 byte. If you have a problem about intellectual property, child pornography or immature images with any of these pictures, please send report email to a webmaster at , to remove it from web.