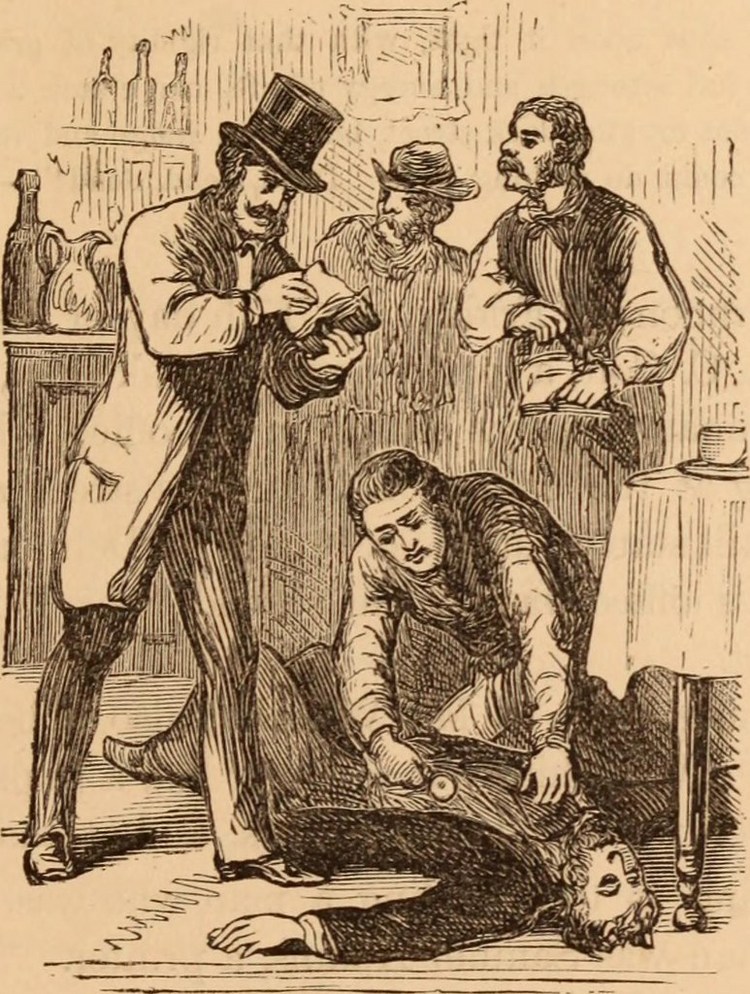 Image from page 36 of "The New York Tombs; its secrets and its mysteries. Being a history of noted criminals, with narratives of their crimes" (1874)

Identifier: newyorktombsitss00sutt Title: The New York Tombs; its secrets and its mysteries. Being a history of noted criminals, with narratives of their crimes Year: 1874 (1870s) Authors: Sutton, Charles Durst, Seymour B., 1913-, former owner. NC Mix, James B., editor Mackeever, Samuel Anderson, 1848-, editor Subjects: Manhattan Detention Complex (New York, N.Y.) Crime Publisher: New York, United States Pub. Co. Contributing Library: Columbia University Libraries Digitizing Sponsor: The Durst Organization View Book Page: Book Viewer About This Book: Catalog Entry View All Images: All Images From Book Click here to view book online to see this illustration in context in a browseable online version of this book. Text Appearing Before Image: nd was sent tothe State Prison for two years. During his incarceration in the Tombs he was frequently visitedby a handsome young woman, who was possessed of some moneyand considerable jewelry—diamonds, etc.—which she sacrificed tomeet the expenses of Mulligans trial. On the evening precedinghis departure for Sing Sing she called upon him, and in so many.words offered to marry him. He consented. The knot was tiedby Judge Brennan, who at that time was on the bench. The next BILLY MULLIGAN. 63 day they started on their wedding tour for Sing Sing, the bridemanifesting a devotion such as woman only knows. Mulligan didnot remain long in prison. After he had been there about threemonths he was pardoned. In spite of the devotion of his wife, andall she had done for him, he deserted her on his release from jailand returned to California, where, getting into trouble, he wasordered to be arrested. He was pursued by the officers into ahouse, into which he barricaded himself. When the officers Text Appearing After Image: A BAR ROOM VICTIM. approached he made a desperate resistance, firing several shotsthrough the window at the crowd below, one of which took effectThe door was forced only to find Mulligan at the head of the stairswith a revolver in his hand He had evidently made up his mindnot to be taken alive. At length, seeing there was no other alternative, and really inself-defence, one of the officers drew his pistol and shot him, kill-ing him instantly. Few mourned his loss. CHAPTER VI. COLTS CASE.—THE MURDER OF SAMUEL ADAMS.—THE DEATH GRAPPLE IN COLTS OFFICE. SHIPPING THE BODY TO NEW ORLEANS.—DETECTION, ARREST, THE TOMBS.—THE WEDDING INTHE CELL. SUICIDE OF COLT. The hand had shut upon it tight, with that rigidity of grasp with which noliving man, in the full strength and energy of life, can clutch a prize he has won.They dragged him out into the dark street, but jury, judge and hangman could havedone no more, and could do nothing now. Dead, dead, dead!—Dickens, in Martin Chuzzlewit. f Note About Images Please note that these images are extracted from scanned page images that may have been digitally enhanced for readability - coloration and appearance of these illustrations may not perfectly resemble the original work.

This Woman In The Window Book - image-from-page-36-of-the-new-york-tombs-its-secrets-and-its-mysteries-being-a-history-of-noted-criminals-with-narratives-of-their-crimes-1874- on net.photos image has 773x1024 pixels (original) and is uploaded to . The image size is 241007 byte. If you have a problem about intellectual property, child pornography or immature images with any of these pictures, please send report email to a webmaster at , to remove it from web.