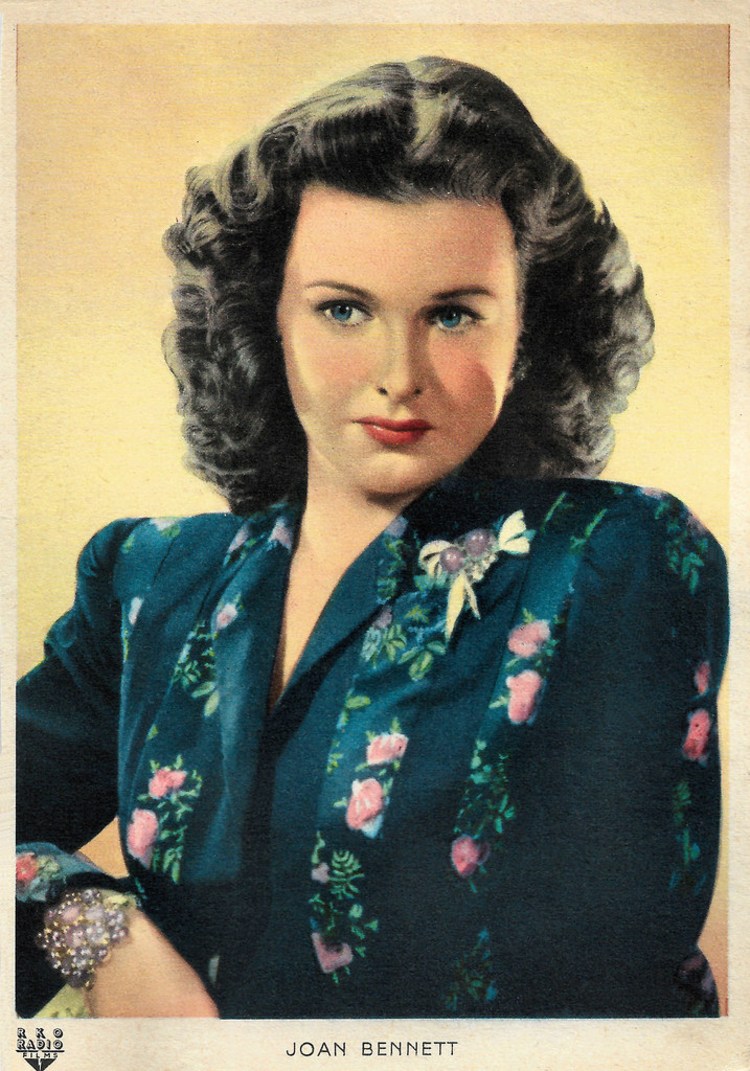 Italian postcard by Garami, Milano, no. 154. Photo: RKO Radio Films. Joan Bennett in The Woman in the Window (Fritz Lang, 1944). Joan Bennett (1910–1990) was an American actress who had her breakthrough in Little Women (George Cukor, 1933). Producer Walter Wanger helped to manage her career and eventually married her in 1940. At the beginning of the 1940s, Bennett appeared in four films by Fritz Lang. These turned her in a femme fatale of the Film Noir. Joan Bennett was born in Palisades Park (other sources say Fort Lee) in New Jersey as the youngest of the three daughters of actors Richard Bennett and Adrienne Morrison. Her older sisters were Constance and Barbara Bennett. Bennett started her career as an actress when she was a child. She married John Marion Fox in 1926, at the age of 16, but they divorced in 1928. She had one daughter with him. At the age of 18 she was debuting on Broadway, and, apart from bit parts in the silent era, at age 19 she had her first important film roles in the early talkies Bulldog Drummond (F. Richard Jones, 1929), starring Ronald Colman, and Disraeli (Alfred E. Green, 1929), starring George Arliss. Bennett easily made the passage to sound cinema and starred e.d. in the United Artists musical Puttin' on the Ritz (Edward Sloman, 1930). She got a contract with Fox and was featured in films as the blonde girl in e.g. She Wanted a Millionaire and Me and My Gal, both 1932. She left Fox in 1933 to act in the RKO film Little Women (George Cukor, 1933), as pert sister Amy opposite Kathryn Hepburn as Jo. Bennett struggled hard to hold on because she was not taken seriously. In addition, she was often compared negatively to her sister Constance, who had since become a superstar. In 1932 she married screenwriter & film producer Gene Markey and had one daughter with him, but they divorced in 1937. Little Women brought Bennett to the attention of Walter Wanger, who helped to manage her career and eventually married her in 1940. Together with director Tay Garnett, Wanger managed to persuade Bennett to dye her hair brown. She was subsequently staged in films as 'the seductive woman' and received more attention. During the search for the role of Scarlett O'Hara in Gone with the Wind, Bennett was tested and left a good impression on producer David O. Selznick. Bennett seemed to get the role, but Selznick later became more interested in Paulette Goddard, who would eventually be replaced by Vivien Leigh. At the beginning of the 1940s, Bennett appeared in four films by Fritz Lang. Three of those films, Man Hunt (1941), The Woman in the Window (1944), and Scarlet Street (1945), turned Bennett into a Film Noir femme fatale. In addition, she has also appeared in films by Jean Renoir (The Woman on the Beach, 1947) and Max Ophüls (The Reckless Moment, 1949). Bennett also played the wife of Spencer Tracy and mother of Elizabeth Taylor in Father of the Bride (Vincente Minnelli, 1950) and the sequel, Father's Little Dividend (Vincente Minnelli, 1951). For 12 years, Bennett had the same agent, Jennings Lang. In 1951 Wanger shot down Lang, presuming they had an affair. Lang did not die but sustained serious injuries. It was considered a scandal and it destroyed Bennett's career. Wanger got only four months of prison and moved out from Bennett, but remained married to her until 1965. Bennett still managed to develop a successful career in theater and television. From 1966 to 1971, for example, she was featured in the Dark Shadows television series. For this, she was nominated for an Emmy Award. She could still be seen in a few films, including Dario Argento's Suspiria (1977). In 1978 Bennett married David Wilde, a retired businessman and movie critic. In 1990 in Scarsdale, NY, she died of a heart attack at the age of 80. For her work, she has a star on the Hollywood Walk of Fame. Sources: Wikipedia (English and Dutch), and IMDb. And, please check out our blog European Film Star Postcards.

This Woman In The Window 1944 - joan-bennett-in-the-woman-in-the-window-1944- on net.photos image has 717x1024 pixels (original) and is uploaded to . The image size is 267244 byte. If you have a problem about intellectual property, child pornography or immature images with any of these pictures, please send report email to a webmaster at , to remove it from web.