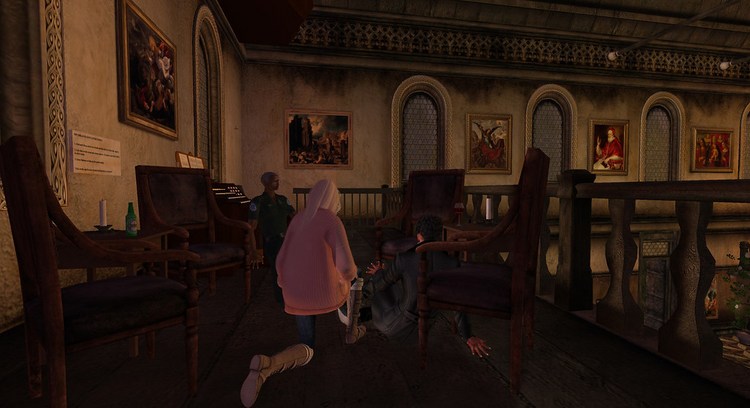 We all traded looks that said we knew we were in the crapper -- and it was getting deep.

We managed to sneak out of the cave, and were planning to continue to the back, to get on with our wall climbing scheme (which seemed even more likely to succeed with Gary helping), but searching singers diverted our path and we ended up at the chapel. Oddly, it was deserted, and we wondered if the singers were all at the house, or in the crypt. We didn't discuss the wisdom or foolishness of ducking inside when we heard searchers approaching -- we had nowhere else to hide. So, we ducked inside and stealthily made our way up to the choir loft. Ramirez worried that the singers would go up there, for more singing, but I recalled from our earlier visit that, while the pews looked well used, the loft had a deserted, dusty, barely scuffed look to it. We'd barely gotten to the top, burying ourselves in shadows, when the chapel began to fill up with the singers. The minister and the hooded figure entered last, and shortly after that, his "sermon" began, This time, there was no Latin involved. So, I could understand what was being shouted at the ecstatic, writhing singers. None of it was healthy, even for rabid-Christian fanatics. In fact, I'm not sure that this has anything to do with Christianity anymore, not even a twisted, cult-like version. Most of the Son, Father, and Holy Ghost words were there, along with fire and brimstone, but I began to realize the context was -- skewed in favor of the fire and brimstone. I don't know when the Holy Trinity became the Bloodthirsty Boys (though I suspect the Crusades had at least a little to do with it, because I've noticed that's what no small number of religions tend to do, kill in the names of their deities), but the followers usually cloak their bloodshed in piety. These folk have embraced the blood. Everything in the sermon revolved around shedding blood for the empowerment of their deities, AND for the followers. We all traded looks that said we knew we were in the crapper -- and it was getting deep. (I hadn't realized how long it had been since I'd gone back to Blacklichen Bluff, but it's time to get this story wrapped up. So, here we go!)

This Woman At The Well Sermon - we-all-traded-looks-that-said-we-knew-we-were-in-the-crapper-and-it-was-getting-deep- on net.photos image has 1024x557 pixels (original) and is uploaded to . The image size is 136415 byte. If you have a problem about intellectual property, child pornography or immature images with any of these pictures, please send report email to a webmaster at , to remove it from web.