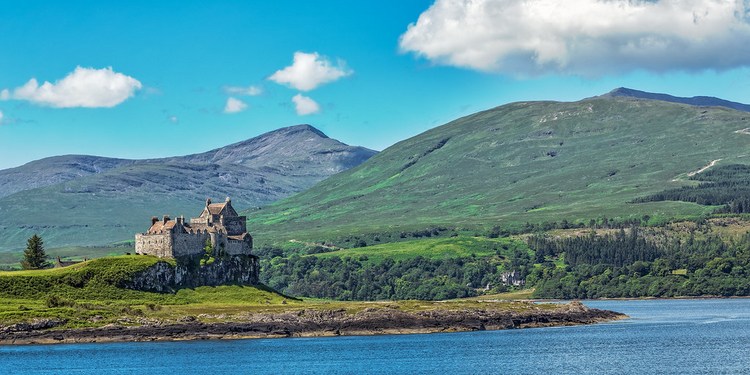 ... wouldn’t be quite like this. I don’t want a place bigger than I can take care of by myself. It would take me a month just to cut the grass here! Fortunately, for all who visit, there are others who keep this place spiffy. Joyce and I had been on the hunt for castles associated with her Scottish ancestry, though this is not one of them. This is Duart Castle on the Isle of Mull in Scotland, as seen from the ferry. It dates back to the 13th century and is the seat of Clan MacLean. There’s quite a history to this place, much of it not so good for the MacLeans, but it is history nonetheless, and many can trace their ancestry to this place. Many in the United Kingdom seem to have little or no interest in genealogy, though, with some in Scotland who have interest in seceding from the UK, you would think that they would have at least some passing interest in their ancestry as well. Many here in the states are truly mutts, with ties all over this world... that’s largely why they have such concern for their ancestry, as does Joyce. Joyce’s involvement in this has been interesting to me, and I have helped her with her work as a North Carolina convener of the House of Boyd, which is essentially a Scottish Clan. Distant voices draw me on too, though they are those of the Bible and of the Reformation, such as John Knox from here in Scotland... I’m concerned more for where I’m going than where I’ve been. I grew up in a military family that moved around this country... a lot! We had no roots, and I didn’t really get to know others of my extended family until later in life. I was much a loner then, as I hated leaving friends behind between stations... genealogy just hasn’t been as important to me, because it was difficult to wrap my mind around such connections... and I’m still working on that, which is somewhat weird to me. I love people, I love the interaction with people, and I have a compassion for people, as I hate to see others hurt... and yet, deep down, I’m an introvert. Figure that out! There’s a small town in Virginia named for some of Joyce’s distant kin, Boydton. She is always invited to Boydton Day, a celebration with a parade that attracts many descendants... it concludes with a service at the old church and a catered dinner at the historic Boyd Tavern. We attended a service along with Joyce’s mother that was only an homily given by an apparent agnostic, who ended her tirade with “And I am the great, great, great, (etc) grandniece of Robert Boyd (one of the forebears of the Boyd family) and the great, great, (etc) grandniece of William Boyd (another forebearer), and it is well documented!” As that "sermon" took us to no edifying solution, my first thought was “Whoop-de-doo!” My second thought wasn’t much better. Back at the Boyd Tavern, I noticed many had oversized permanent name tags that also gave their supposed association with the Boyd ancestors. It was written as "GGGGGG Grandson of so-and-so", followed by another line, and often another. This included the woman who gave the presentation at the service. So, I found the largest stick-on name label I could find, put as many Gs as I could fit on it, followed by ... "grandnephew, once removed, of Thag Boyd, famous Scottish caveman... and it is well documented!" Everyone was amused... with the exception of the pretentious presenter, which left me with only one conclusion: mission complete!

This Woman At The Well Sermon - my-summer-place- on net.photos image has 1024x512 pixels (original) and is uploaded to . The image size is 200295 byte. If you have a problem about intellectual property, child pornography or immature images with any of these pictures, please send report email to a webmaster at , to remove it from web.