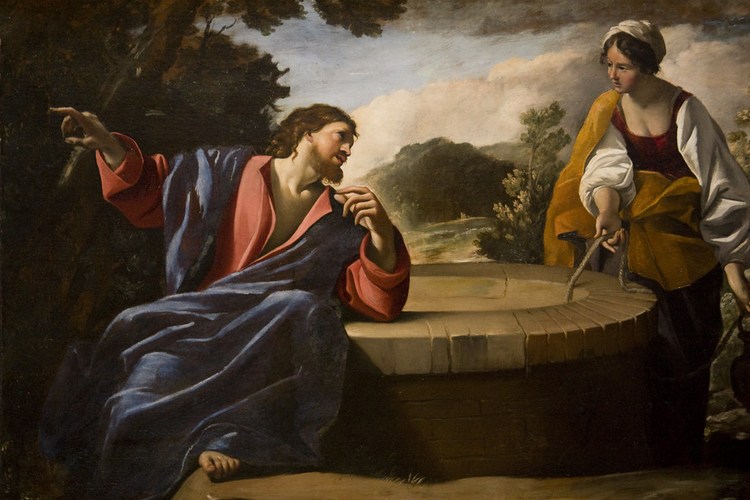 Jesus and the Samaritan Woman at the Well

"Jesus came to the Samaritan town called Sychar, near the land that Jacob gave to his son Joseph. Jacob’s well is there and Jesus, tired by the journey, sat straight down by the well. It was about the sixth hour. When a Samaritan woman came to draw water, Jesus said to her, ‘Give me a drink.’ His disciples had gone into the town to buy food. The Samaritan woman said to him, ‘What? You are a Jew and you ask me, a Samaritan, for a drink?’ – Jews, in fact, do not associate with Samaritans. Jesus replied: ‘If you only knew what God is offering and who it is that is saying to you: Give me a drink, you would have been the one to ask, and he would have given you living water.’" - John 4:5-10, which is part of today's Gospel for the Third Sunday of Lent. This painting of Christ and the Samaritan Woman is in the museum at the Dominican priory of Santa Sabina in Rome. There is a good sermon for today on Godzdogz.

This Woman At The Well Sermon - jesus-and-the-samaritan-woman-at-the-well on net.photos image has 1024x683 pixels (original) and is uploaded to . The image size is 173444 byte. If you have a problem about intellectual property, child pornography or immature images with any of these pictures, please send report email to a webmaster at , to remove it from web.