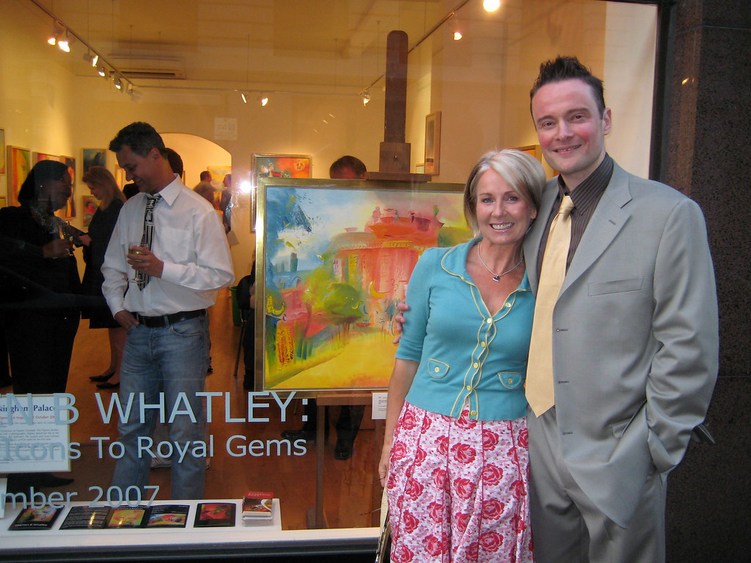 Since the 1920s, when the Mayor Gallery opened in Cork Street, in the central London district of Mayfair has been famed for being a famed thorough fair of art galleries; reach a peak of popularity in the 1960s and 1970s. Expressionist painter Stephen B Whatley used to visit with his portfolio, fresh out of art school in the 1980s; finally, after exhibitions elsewhere in London over the years, staging a vibrant exhibition in Cork Street called Hollywood Icons to Royal Gems at the Arndean Gallery in September 2007. A sign of the times, this gallery, along with several of the galleries have disappeared; and this week, it is reported that the street and its galleries are under threat of developers wishing to convert the buildings into luxury apartments. London's Evening Standard newspaper (November 14, 2012) reported: "...Gallery owners, artists and buyers have now launched a campaign to save Cork Street, with more than 12,000 people signing a petition against the plans, including comedian Graham Norton, actor Bill Nighy, Mary Portas, novelist Alan Hollinghurst and illustrator Quentin Blake. Lady Antonia Fraser says: “I had my first job in Cork Street working for Weidenfeld & Nicolson: it’s a paradise for the arts and should stay that way,” while novelist A S Byatt called the proposals an “act of vandalism”..." Enchanted by the street - that runs northward behind the Royal Academy of Arts - Stephen B Whatley made drawings on location in 2003 ' lamenting the fortunes of the art world' - already several well known galleries had closed, including the Odette Gilbert - with a view to producing a painting of the street ; at some future date. The internet has perhaps taken over from galleries from being the initial source to visit to view works; but it would be very sad if the lights in this avenue of art were to go out. Stephen B Whatley is pictured here, in Cork Street, as his 2007 Private View was beginning; with TV presenter & art collector, Sarah Greene. Behind them is casting director,Paul de Freitas - who owns 7 of the artists's paintings - his painting of Kensington Palace (now in a private collection) & an array of oil paintings - including his painting of the Crown Jewels (on loan from the Tower of London) & his painting of Buckingham Palace (on loan from the Royal Collection). www.stephenbwhatley.com

This Woman At The Well Matthew - cork-street-london-w1-2007-with-artist-stephen-b-whatley on net.photos image has 1024x768 pixels (original) and is uploaded to . The image size is 243475 byte. If you have a problem about intellectual property, child pornography or immature images with any of these pictures, please send report email to a webmaster at , to remove it from web.