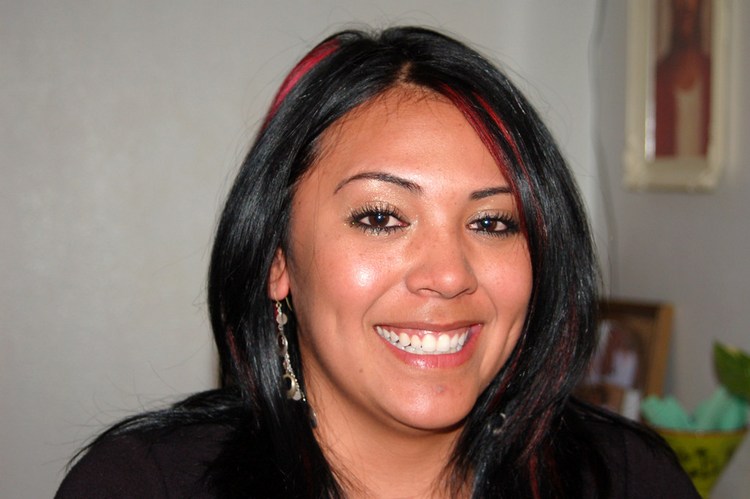 I've felt sort of sick all this week, and I was barely able to rouse myself Friday evening to attend a social for the high priests group in our ward. It was at the group leader's home, which is within walking distance of where we live. I drove there, however, and took my camera with me, because I wanted to see if I could first capture a couple of good sunset photos. I was unsuccessful, but in view of what happened later, I really didn't care all that much. Only one other couple showed up for the social. (I went alone, because my wife wasn't feeling well, either.) The group leader is Samoan, which gives him something in common with our daughter Vanessa, but that is another story. He has a daughter named Christina, who is about 19 years of age. She appeared during the course of the evening while on her way somewhere else, and I struck up a conversation with her about a picture she had taken of one of our temples. I wanted to know what camera she had used, so she pulled it out of her purse and showed it to me. It was a Nikon CoolPix 4600, so we talked cameras for a minute or two, and I asked her if she wanted to see mine. This was the result of my show-and-tell experience, and it was worth the whole evening to capture this image, even though Christina is very camera-shy. I managed to capture some of her beauty, but not quite enough to do her justice. After I took two pictures, I decided not to press my luck any further, and this one was by far the better of the two. I don't understand why some people are so intimidated about being in front of a camera, I really don't. Note the portrait of Christ on the wall behind Christina.

This Woman At The Well Lds - christina on net.photos image has 1024x681 pixels (original) and is uploaded to . The image size is 138104 byte. If you have a problem about intellectual property, child pornography or immature images with any of these pictures, please send report email to a webmaster at , to remove it from web.