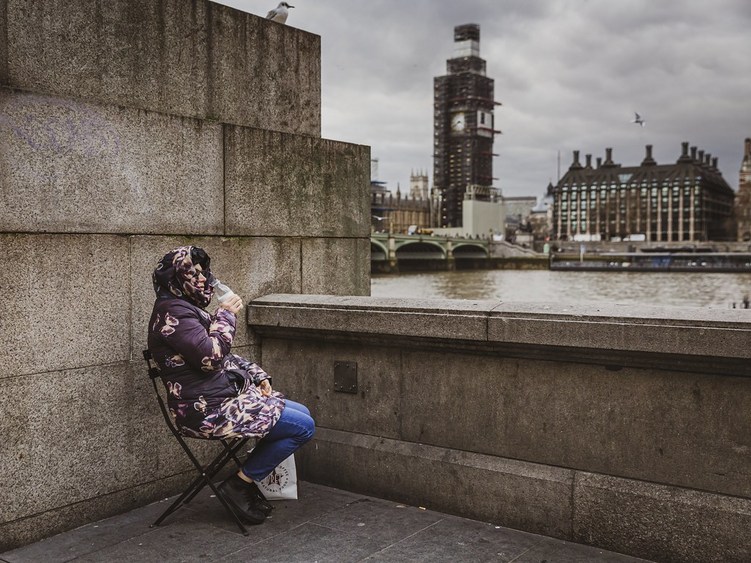 The Veneer of Democracy

© Leanne Boulton, All Rights Reserved Street photography from London, England. Colour re-edit of a shot from February 2019. Last night, on the 27th April 2022, democracy ended in the United Kingdom. This may sound melodramatic but if you consider the consequences for just a moment, the reality is nothing short of horrifying. The UK Conservative Government have passed a number of bills through the House of Lords, after a number of attempts, where few opposition peers turned up late at night and these bills will receive automatic Royal Ascent today during the pre-election Proroguing of Parliament. A new police and crime bill passed on 26th April that makes 'noisy protest' illegal and this includes any protest found to be disruptive. A right to peaceful (as in non-violent) protest is essential to a functional democracy. A new elections bill passed on the 27th April that means that all voters now need to provide photographic I.D., excluding even myself from voting now as well as millions of others. In addition, and more worryingly, the bill allows the Conservative Government to control the Electoral Commission - the independent body that impartially protects the integrity of our elections, and democracy, will now be completely under the control of the current Government. While our mainstream media is distracted by the 'dead cat' Tory sleaze stories of misogyny and MPs watching porn in the House of Commons, they are completely ignoring these new autocratic laws. Of course, the mainstream media is majority owned by Tory donors or run by Tory stooges. No wonder they wish to sell off Channel 4, the only television channel still holding Government to account. Anyone wondering how the people of Germany allowed the country to slide into Fascist rule in the 1930s need look no further. First they control the media, then they get away with breaking laws and telling lies with impunity. The sleaze and 'dead cat' stories then distract while laws and polices are pushed through that erode democracy. Oh, and the current Government are already scapegoating a couple of minority groups into 'the enemy' as well. Laws affecting these are already in place and more are planned. If you look deeper than the headlines you will see more in common with 1930s Germany than you would care to imagine. Ah, 'but we don't have concentration camps' you may say - well the bill making it possible for the Government to remove asylum seekers to Rwanda was also passed last night. Think these asylum seekers are all just 'economic migrants'? Think again. Any one of us is just one disaster away from becoming asylum seekers ourselves. We now live in an elected dictatorship.

This Woman At The Well Commentary - the-veneer-of-democracy on net.photos image has 1024x768 pixels (original) and is uploaded to . The image size is 241827 byte. If you have a problem about intellectual property, child pornography or immature images with any of these pictures, please send report email to a webmaster at , to remove it from web.