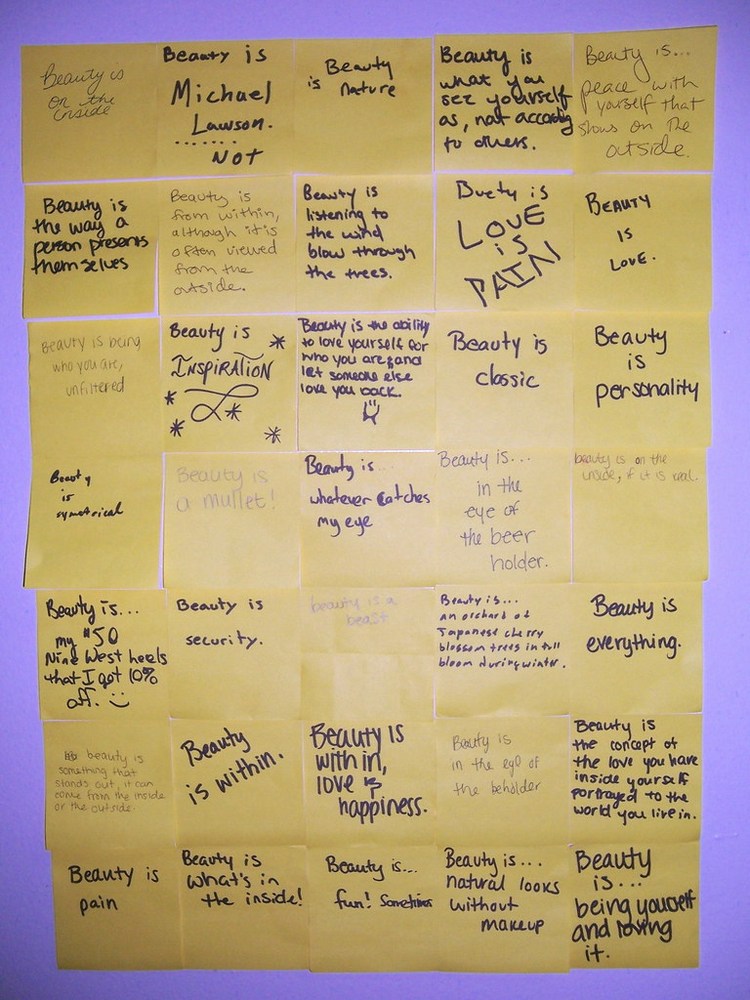 last wednesday in my drawing 3 class, moser handed us an article, told us to read it, and create a piece inspired by it. he told us it would be due at 8:30 (it being 6:30 at the time) and then walked out. the point of the article basically boiled down to the usual "beauty is in the eye of the beholder" type of thing. different people have different concepts of beauty. it also varies from culture to culture. it also talked about how the concept of beauty in art has changed over the past however many years with the onset of modernism and whatnot. so we all read it... and then kind of looked around at each other. some people left for the library to do some research... and/or at least look like they were doing something. then they came back and took out their 18x24 drawing pads and set to work. i looked at my drawing pad and decided that i could not capture the 'essence' of beauty and all the differing viewpoints on a single sheet of typical drawing paper. i though for a bit, watching everyone scribbling away and got a bit of an idea. i traked down moser and pitched it to him and he seemed to like it. so. armed with a pad of yellow sticky notes, a black sharpy, and one hour to go until the due time i set out across campus. i went to the west lawn, the laundry room, the rotunda, the dorm halls, etc and found as many people as i could willing to help me. i ended up with 35 people. my instructions to them were thus: take a sticky note and write 'beauty is..." and then fill in the blank with whatever you personally feel defines beauty. i didnt care what it was. it was totally anonymous since i didnt know any of these people (except my two roommates that i cornered into writing one for me). and well... this was the result. i didnt read any of them till i got back to class and i put them up on the wall like this. there was no strategic order to them except to space out the different types of handwriting (which after i put them up, i thought was a nice touch/additional commentary on individual differences and the beauty in them.). then i read them... expecting to find something deep... penetrating... something that would... i dont know... mean something. but in the end most of them were so cliche it kind of made me sick. is this really what these people think? (granted some of them are a bit deeper and some are funny, but the majority of them... yeah...) as art students we are, in a way, taught to stand back and look at the cliches that our culture produces, and then turn around and go our own way (which in some cases may or may not include these cliches in some way, but usually there is some kind of personal reason/statement for doing so). but when i thought about it further i realized that the regurgitaion of these sappy cliches actually emphasized a point made in the article. personal concepts of beauty are different, yes. but they are more or less shaped by the culture we live in. for example: in the US we are more inclined to think that a tall, thin, blonde woman is attractive than would be the case in some other cultures. so anyway, here is my piece. i'm actually rather proud of it--for 2 hours worth of work and forcing myself into a place i'm not particularly comfortable (i'm not a very outgoing kind of person. i dont strike up conversation very easily with people i dont know. so... i think that talking to 33 people i've never met in one hour is quite an accomplishment.) beauty is. the end. : )

This Woman At The Well Commentary - beauty-is- on net.photos image has 768x1024 pixels (original) and is uploaded to . The image size is 195766 byte. If you have a problem about intellectual property, child pornography or immature images with any of these pictures, please send report email to a webmaster at , to remove it from web.