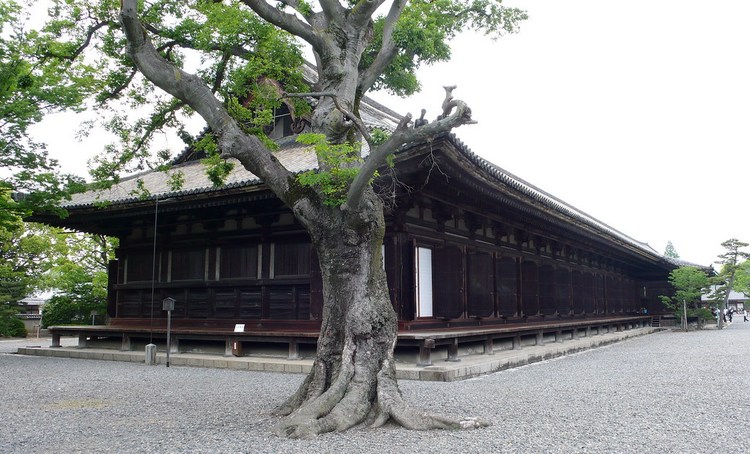 Japan's longest wooden building, rebuilt in 1266. Alas, you're not allowed to photograph the 1,001 gilded bodhisattvas inside, so here's the outside. This page has some photos of the inner hall of statues. If you've ever read the Japanese historical meganovel Musashi (or seen the filmed adaptation Duel at Ichijoji Temple), this was where, on a snowy night in 1604, the ronin Miyamoto Musashi -- perhaps the most renowned swordsman who ever lived -- dueled with Yoshioka Denshichirō.      Denshichirō's feet inched forward. At the tip of his sword, his willpower quivered toward the start of a movement.      Two lives expired with two strokes of a single sword. First, Musashi attacked to his rear, and Ōtaguro Hyōsuke's head, or a piece of it, sailed past Musashi like a great crimson cherry, as the body staggered lifelessly toward Denshichirō. The second horrendous scream -- Denshichirō's cry of attack -- was cut short midway, the broken-off sound thinning out into the space around them. Musashi leapt so high that he appeared to have sprung from the level of his opponent's chest. Denshichirō's big frame reeled backward and dropped in a spray of white snow.      Body pitifully bent, face buried in the snow, the dying man cried, "Wait! Wait!"      Musashi was no longer there.      "Hear that?"      "It's Denshichirō!"      "He's been hurt!"      The black forms of Genzaemon and the Yoshioka disciples rushed across the courtyard like a wave.      "Look! Hyōsuke's been killed!"      "Denshichirō!"      "Denshichirō!"      Yet they knew there was no use calling, no use thinking about medical treatment. Hyōsuke's head had been sliced sideways from the right ear to the middle of the mouth, Denshichirō's from the top down to the right cheekbone. All in a matter of seconds.      "That's...that's why I warned you," sputtered Genzaemon. "That's why I told you not to take him too lightly. Oh, Denshichirō, Denshichirō!" The old man hugged his nephew's body, trying in vain to console it.      Genzaemon clung to Denshichirō's corpse, but it angered him to see the others milling about in the blood-reddened snow. "What happened to Musashi?" he thundered.      Some had already started searching; they saw no sign of Musashi.      "He's not here," came the answer, timid and obtuse.      "He's around here somewhere," barked Genzaemon. "He hasn't got wings. If I don't get in a blow of revenge, I can never again hold my head up as a member of the Yoshioka family. Find him!"      One man gasped and pointed. The others fell back a pace and stared in the direction indicated.      "It's Musashi."      "Musashi?"      As the idea sank in, silence filled the air, not the tranquility of a place of worship, but an ominous, diabolical silence as though ears, eyes and brains had ceased to function.      Whatever the man had seen, it was not Musashi, for Musashi was standing under the eaves of the nearest building. His eyes fixed on the Yoshioka men and his back pressed to the wall, he edged his way along until he reached the southwest corner of the Sanjūsangendō. He climbed onto the veranda and crept, slowly and quietly, to the center.      "Will they attack?" he asked himself. When they made no movement in his direction, he continued stealthily on to the north side of the building and, with a bound, disappeared into the darkness. -- Musashi, by Eiji Yoshikawa (1935): Book IV, Wind, chapter 7, Reverberations in the Snow. Translated from the Japanese by Charles S. Terry (1981). See where this picture was taken. [?]

This Willpower Group - sanj-sangend-of-kyoto on net.photos image has 1024x620 pixels (original) and is uploaded to . The image size is 235585 byte. If you have a problem about intellectual property, child pornography or immature images with any of these pictures, please send report email to a webmaster at , to remove it from web.