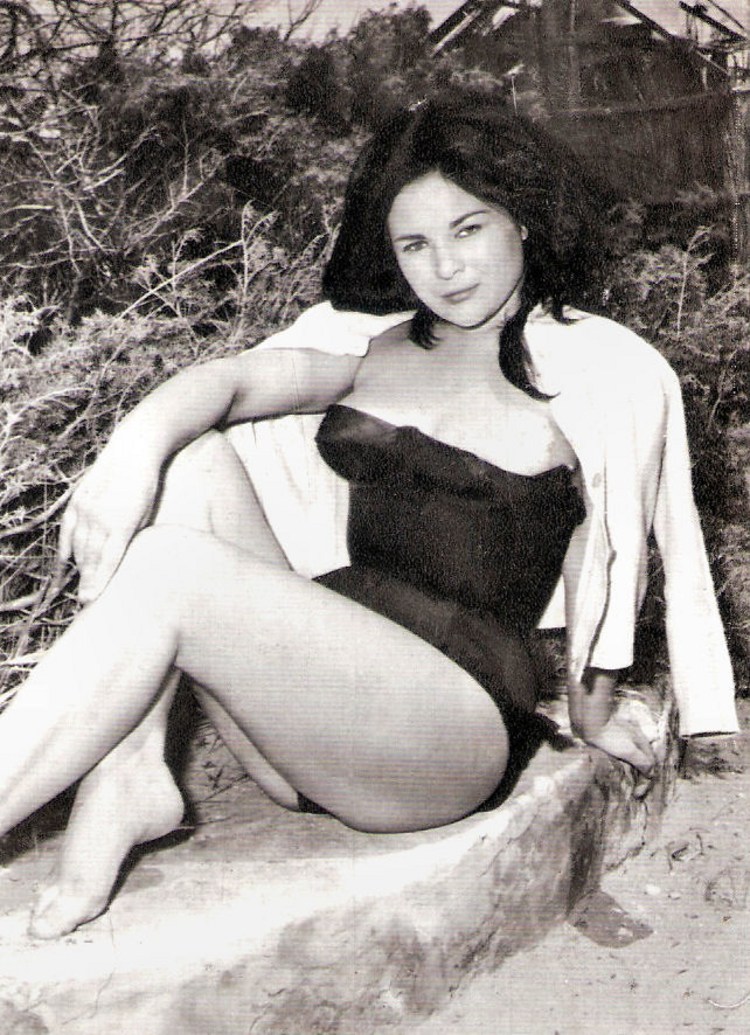 Italian collectors card by La Rotografica Romana. Edito dalla Nat Nuova Alta Tensione. Beautiful Italian actress Gabriella Giorgelli (1941) appeared in more than 70 films since 1960. She is known for her supporting roles in masterpieces like Mario Monicelli’s I compagni (1963), and Federico Fellini’s La città delle donne (1980), but she also appeared in Spaghetti Westerns, Giallos and Sexploitation films. Gabriella Giorgelli was born in 1941 in Carrara, Tuscany, Italy. She worked as a secretary and typist, but she had other aspirations. In 1960, she made her film debut with a bit part in Tutti a casa/Everybody Go Home (Luigi Comencini, 1960), an international success. She was attractive and had the willpower and ambition for an acting career and tried to grab the attention of film makers. In 1961 she was among the finalists for Miss Italia, a springboard for many Italian starlets. The following year, she impressed as the prostitute Teresa in Damiano Damiani's L' Isola di Arturo/Arturo's Island (1962). In the same year she played a prostitute in in the first feature film directed by 21 years-old Bernardo Bertolucci, La commare secca (1962). It is a Rashomon like exploration of the murder of a prostitute, based on a story by Pier Paolo Pasolini. Tom Wiener at AllMovie: “For a 21-year-old filmmaker, this is a remarkably pessimistic work; the film's opening image, of a sheaf of paper tossed from a car on highway overpass and eventually floating down to the corpse of the prostitute on the grass, to the murderer's cries as he's arrested -- "She was only a whore!" -- we get a sense that life, at least in some quarters of society, is easily disposable.” And the following year, she acted in I Compagni/The Organizer (Mario Monicelli, 1963) with Marcello Mastroianni as a labour activist who becomes involved with a group of textile factory workers in Turin at the end of the 19th century who go on strike. The script was nominated for Best Original Screenplay at the 37th Academy Awards. She also appeared in the comedy Frenesia dell’estate/Shivers in Summer (Luigi Zampa, 1963) starring Vittorio Gassman. She also appeared in a typical film genre of the era, the anthology film. An example was the French-Dutch-Italian-Japanese coproduction Les plus belles escroqueries du monde/The World's Most Beautiful Swindlers (1964), composed of five segments, each of which was created with a different set of writers, directors, and actors. The directors were Claude Chabrol, Jean-Luc Godard, Ugo Gregoretti, Hiromichi Horikawa and Roman Polanski. Giorgelli played a Neapolitan prostitute in the Italian segment, directed by Gregoretti. When film roles were few and far between, she appeared in early versions of the foto romanzi, such as in Sadistik. Gabriella Giorgelli continued her career with roles in Spaghetti Westerns and erotic comedies. She played a saloon dancer in the Western Uno straniero a Sacramento/Stranger in Sacramento is (Sergio Bergonzelli, 1965) starring bodybuilder Mickey Hargitay. In I lunghi giorni della vendetta/Long Days of Vengeance (Florestano Vancini, 1967), she played the female lead opposite Giuliano Gemma and Francisco Rabal. The film is a spaghetti western version of Alexandre Dumas' novel The Count of Monte Cristo. Also based on a novel by Dumas was the historical drama Le calde notti di Lady Hamilton/Emma Hamilton (Christian-Jaque, 1968) which depicts the love affair between Emma Hamilton (MIchèle Mercier) and Horatio Nelson (Richard Johnson). In these films she generally played supporting parts. A commercial success was the Italian comedy Quando le Donne Avevano la Coda/When Women Had Tails (Pasquale Festa Campanile, 1970) starring Giuliano Gemma and Senta Berger. It was set in pre-historic times when ‘women had tails’ and were hunted by cavemen. In France, she appeared in Le voyou/The Crook (Claude Lelouch, 1970) with Jean-Louis Trintignant as an incurable thief. Another box office success was the Western comedy La vita a volte è molto dura, vero Provvidenza?/Life Is Tough, Eh Providence? (Giulio Petroni, 1972) with Tomas Milian. Interesting is also the Giallo Sette orchidee macchiate di rosso/Seven Blood-Stained Orchids (Umberto Lenzi, 1972) with Rossella Flak and Uschi Glas. It was a coproduction with Germany, where it was presented 38th (and final) Edgar Wallace film from the post-war era. Giorgelli played a prostitute in a Italian-French coproduction, the Giallo-Poliziottesco La polizia è al servizio del cittadino?/The Police Serve the Citizens? (Romolo Guerrieri, 1973) with Enrico Maria Salerno and John Steiner. Probably the best of her later films was La città delle donne /City of Women (Federico Fellini, 1980). Amid Fellini's characteristic combination of dreamlike, outrageous, and artistic imagery, Marcello Mastroianni plays Snàporaz, a man who voyages through male and female spaces toward a confrontation with his own attitudes toward women and his wife. Giorgelli played the Fishwoman of San Leo. She then again played with Tomas Milian in the poliziottesco-comedy Delitto sull'autostrada/Crime on the Highway (Bruno Corbucci, 1982). It is the ninth chapter in the Nico Giraldi film series starringTomas Milian. She also had a part in the cult favourite Hercules (Luigi Cozzi, 1983) featuring Lou Ferrigno. It was followed by I Cinque del Condor - Squadra selvaggia (Umberto Lenzi, 1985) in which she played a psychic medium. Excellent was Storia d'amore/A Tale of Love (Franco Maselli, 1986) in which she played the mother Blas Roca-Rey’s character. In addition to her film work, she also appeared on television in films and mini-series. One of her later films was the horror film M.D.C. - Maschera di cera/Wax Mask (1997), produced and written by Dario Argento. Previously appointed to be directed by Lucio Fulci, it marked the directorial debut of the special effect artist Sergio Stivaletti. Gabriella Giorgelli can be seen in recent documentaries about actor Amadeo Nazzari and about the comic Sadistik. Sources: Tom Wiener (AllMovie), Wikipedia (German, Italian and English) and IMDb.

This Willpower Group - gabriella-giorgelli on net.photos image has 642x886 pixels (original) and is uploaded to . The image size is 194758 byte. If you have a problem about intellectual property, child pornography or immature images with any of these pictures, please send report email to a webmaster at , to remove it from web.