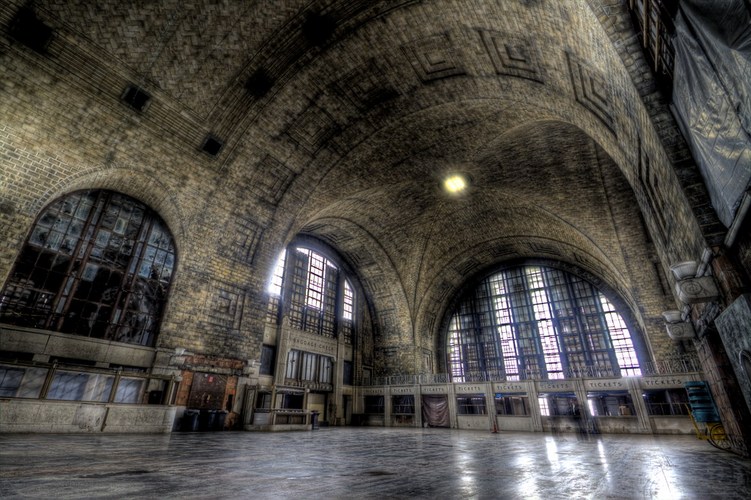 Back From The Brink

The Central Terminal in Buffalo, N.Y. Buffalo in the early 20th century was a booming place, and in 1929 the New York Central Railroad built this magnificent station with its cathedral-like halls on the eastern edge of the city, on the theory that the city would soon grow up around it. Sadly, not. The city’s population has fallen by half, most of its industry is gone, and the old terminal -- where the last passenger boarded a train over 30 years ago -- sits derelict in an impoverished neighborhood, still on the edge of the city. But not as derelict as it once was, not nearly. I was given a walk-though in 2001 and the level of decay was staggering. Demolishing the building was just too expensive, I was told, so it had to be saved, but it seemed to me that parts of it would inevitably collapse on their own. Through sheer willpower and a unending labor, a large and dedicated group of volunteers has brought it back from the brink, halting the decay and making small but noticeable steps toward restoration. I wanted very much to include more of the main hall in this image, but with the people milling about and the various objects cluttering up the floor, this is what I could get.

This Willpower Group - back-from-the-brink on net.photos image has 1024x682 pixels (original) and is uploaded to . The image size is 232755 byte. If you have a problem about intellectual property, child pornography or immature images with any of these pictures, please send report email to a webmaster at , to remove it from web.