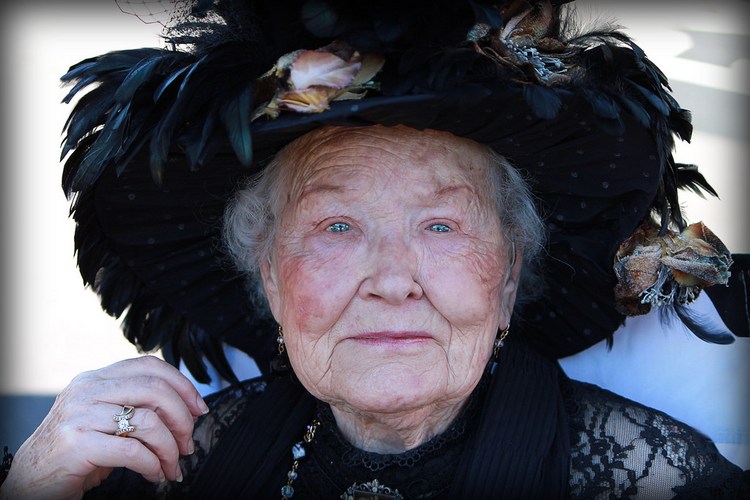 Today was the annual Alpine Viejas Days Parade, which is a fairly small town parade, but always fun and filled with happy people out in the sunshine. 88* is a warm afternoon for us in September, but we had a nice breeze making the day feel like the perfect day for a parade. I took a lot of pictures of the participants and onlookers before it began, then when they started, I drove out and around the route to get some more shots at the finish line. After several marching bands, fire trucks, and horses, passed by, a vintage red tractor rumbled down the street, pulling a wagon with hay bales and people in the back. One of the women was wearing a gorgeous black, Victorian style dress and hat, and she was holding a parasol, too. I kept an eye on her as I took pictures of the dwindling, towards-the-end floats. Eventually, someone got a chair and a drink for Elma, and she was sitting in the shade relaxing with a couple friends, so I had an opportunity to meet her. She was friendly and happy to be a part of the project right away, so I took a couple shots while we chatted. I asked Elma if she would mind taking off her glasses so I could photograph her beautiful eyes. She's been in the parade every year, for at least the last 10. She has always ridden in the Model T before, and she said that was a lot more comfortable than the hay bales she had to sit on this year. It was also a lot easier to get in and out of the vehicle! She hopes next year she will be able to ride in the car again, instead of behind the tractor. After a lot of things Elma shared with me, she would say, ".... but don't put that in the story" or ".... but don't write that down", so here is what I got that she didn't veto or tell me 'off the record': She was born in New Jersey (U.S.), and has lived in many of the other states throughout her life. She lived with her husband for quite a while in Kadoka, South Dakota, and we both decided that was fun to say. Her husband was a minister, so Elma was a minister's wife, and worked as the church secretary for many years. Later in life, her husband was also a consultant to help people find jobs, which Elma says was a very good endeavor, indeed! She and her husband eventually moved to Downey, California, and after he passed away, Elma moved to Alpine. That was in 1989. She lives on a 2 1/2 acre property, and loves to garden. Elma is also very active in her church (Alpine Community Church), The Alpine Women's Club, and she's on the Board of Directors for the Historical Society. Whew! A very busy lady! I told her staying so busy is how she is able to climb up to sit on a hay bale on a flat bed! She turned 90 this year in January. For her 80th birthday, her family and friends celebrated with a big party, and most of her family travelled from all over the country to be together. She has 8 children, 14 grandchildren, and 14 great grandchildren. Her grandson lives in Alpine, and was busy helping out with the parade somewhere. One of her sons lives nearby, too. He's a doctor. When I asked Elma what her passion has been in life, she said her family. When we said our goodbyes, I gave Elma one of my cards, and she put it carefully into her lacey, black, Victorian pouch-purse, so I hope she gets to see her portrait. Elma: thank you for being such a gracious 'hostess' in the shade on a hot afternoon. I felt like we were chatting over tea, as I listened to stories from your life. Find out more about the project and see pictures taken by other photographers at www.flickr.com/groups/100strangers/pool/

This What Is Celebrated On Women's Day - new-friend-57-elma on net.photos image has 1024x683 pixels (original) and is uploaded to . The image size is 187376 byte. If you have a problem about intellectual property, child pornography or immature images with any of these pictures, please send report email to a webmaster at , to remove it from web.