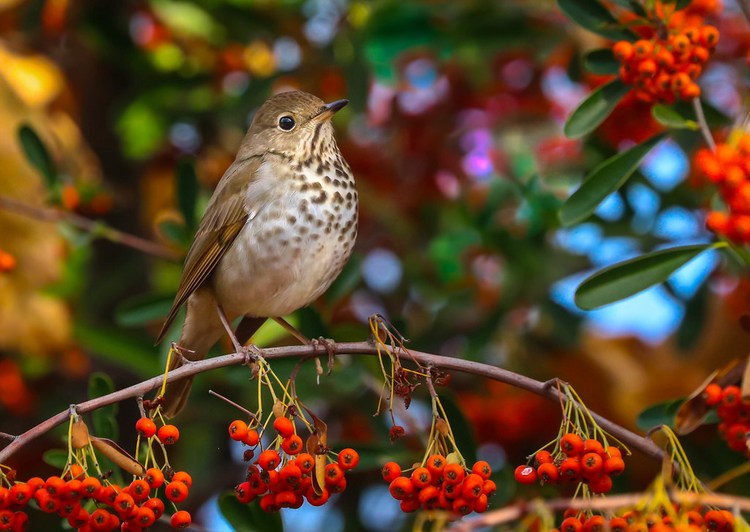 Merry Christmas.....was Happy Thanksgiving to all my flickr monkeys.... "If you take a walk in the woods on a summer evening, you may be treated to the ethereal, flute-like song of the hermit thrush, often the only bird still singing at dusk (and the first bird to sing in the morning). In 1882, naturalist Montague Chamberlain described it as a “vesper hymn that flows so gently out upon the hushed air of the gathering twilight.” The hermit thrush, once nicknamed American nightingale, is among North America’s finest songsters; its beautiful song is one of the reasons Vermont chose the hermit thrush as its state bird. The hermit thrush is one of the first woodland migrants to return to northern New England in spring. If you’re lucky, you may catch a glimpse of this brown bird with a white breast dotted with black and a rusty rump and tail, perched on a log, flicking its tail up and down. ... Extensive research has been conducted on the hermit thrush’s exquisite song. Analysis of spectrograms (graphs of sound frequencies) has shown that the songs of individual hermit thrushes are quite different. Male thrushes have a repertoire of seven to thirteen song types. No two birds sing the same song. The males sing with variety, never repeating the same song type consecutively. Researchers believe it is the female who has shaped the songs of male hermit thrushes over the eons. Males with certain singing characteristics are chosen to be fathers, and those singing behaviors are perpetuated. The melodies of the hermit thrush follow the same mathematical principles that underlie many musical scales. The males favor harmonic chords similar to those in human music. Perhaps this is why the song of the hermit thrush is so appealing to us. Wrote naturalist John Burroughs, “Mounting toward the upland again, I pause reverently as the hush and stillness of twilight come upon the woods… And as the hermit thrush’s evening hymn goes up from the deep solitude below me, I experience that serene exaltation of sentiment of which music, literature, and religion are but the faint types and symbols.” by Susan Shea, a naturalist, writer and conservation consultant who lives in Brookfield, Vermont. www.nhcf.org

This Thirteen Lives - merry-christmas-hermit-the-thrush-king-gillette-ranch-calabasas-southern-california-163 on net.photos image has 1024x726 pixels (original) and is uploaded to . The image size is 200876 byte. If you have a problem about intellectual property, child pornography or immature images with any of these pictures, please send report email to a webmaster at , to remove it from web.