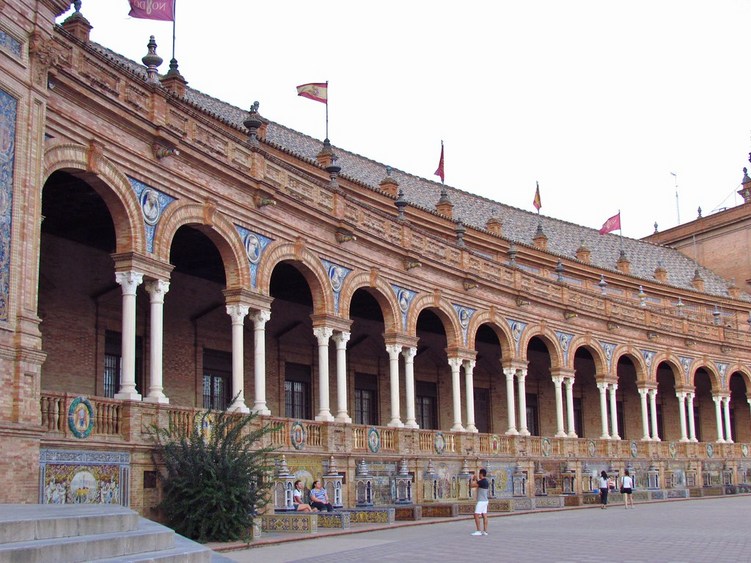 Excerpt from Wikipedia: The Plaza de España ("Spain Square", in English) is a plaza in the Parque de María Luisa (Maria Luisa Park), in Seville, Spain, built in 1928 for the Ibero-American Exposition of 1929. It is a landmark example of the Regionalism Architecture, mixing elements of the Baroque Revival, Renaissance Revival and Moorish Revival (Neo-Mudéjar) styles of Spanish architecture. In 1929, Seville hosted the Ibero-American Exposition World's Fair, located in the celebrated Maria Luisa Park (Parque de María Luisa). The park gardens were designed by Jean-Claude Nicolas Forestier. The entire southern end of the city was redeveloped into an expanse of gardens and grand boulevards. The centre of it is Parque de María Luisa, a "Moorish paradisical style" with a half mile of tiled fountains, pavilions, walls, ponds, benches, and exhedras; lush plantings of palms, orange trees, Mediterranean pines, and stylized flower beds; and with vine hidden bowers. Numerous buildings were constructed in it for the exhibition. The Plaza de España, designed by Aníbal González, was a principal building built on the Maria Luisa Park's edge to showcase Spain's industry and technology exhibits. González combined a mix of 1920s Art Deco and Spanish Renaissance Revival, Spanish Baroque Revival and Neo-Mudéjar styles. The Plaza de España complex is a huge half-circle with buildings continually running around the edge accessible over the moat by numerous bridges representing the four ancient kingdoms of Spain. In the centre is the Vicente Traver fountain. By the walls of the Plaza are many tiled alcoves, each representing a different province of Spain. Each alcove is flanked by a pair of covered bookshelves, said to be used by visitors in the manner of "Little Free Library". Each bookshelf often contains information about their province, yet you can often find regular books as well for some people have taken to donating their favorite book to these shelves. Today the Plaza de España mainly consists of Government buildings. The central government departments, with sensitive adaptive redesign, are located within it. The Plaza's tiled Alcoves of the Provinces are backdrops for visitors' portrait photographs, taken in their own home province's alcove. Towards the end of the park, the grandest mansions from the fair have been adapted as museums. The farthest contains the city's archaeology collections. The main exhibits are Roman mosaics and artefacts from nearby Italica.

This Technology Examples At Home - plaza-de-espana-plaza-de-espa-a-spain-square-seville-spain on net.photos image has 1024x768 pixels (original) and is uploaded to . The image size is 220222 byte. If you have a problem about intellectual property, child pornography or immature images with any of these pictures, please send report email to a webmaster at , to remove it from web.