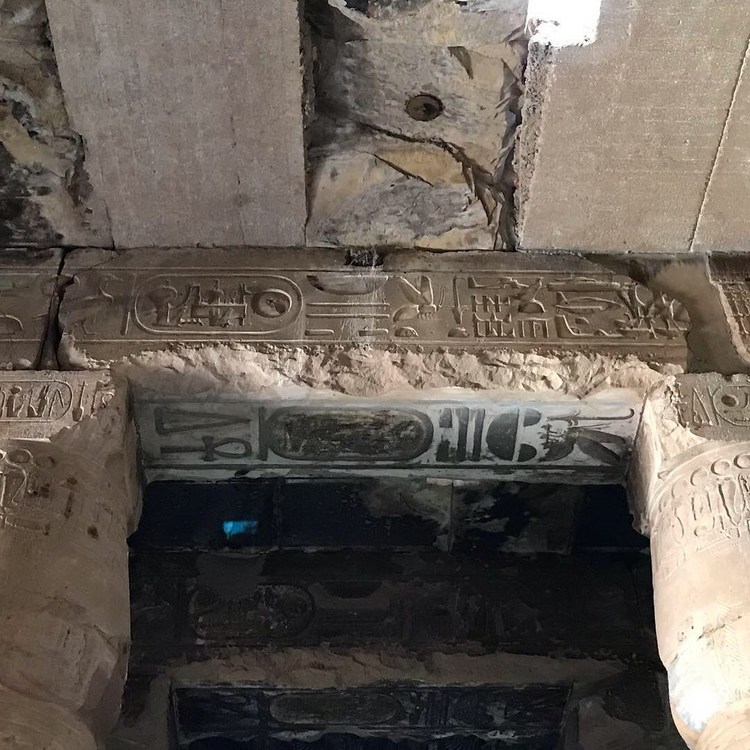 UFOs? The Temple of Seti I, Abydos, Egypt.

The retouched and eroded hieroglyphs in the Temple of Seti I which are said to represent modern vehicles – a helicopter, a submarine, and a zeppelin or plane. Some of the hieroglyphs carved over an arch on the site have been interpreted in esoteric and "ufological" circles as depicting modern technology. The carvings are often thought to be a helicopter, a battle tank or submarine, and a fighter plane (some interpret this as a U.F.O.) However, these conjectures are largely based in pseudoarchaeology, and the picture often claimed as "evidence" has been retouched. *** I've heard of Abydos for the first time for some time, through one of those sensationalist blogs with no credibility. The text said that in that temple, archaeologists had found new hieroglyphs when the plaster of a wall dropped and fell, revealing UFO-like aircraft drawings, including a figure that featured a helicopter. He would be known as the Abydos Helicopter. The most impressive thing about it was that it showed the photo of the hieroglyphs that really looked like flying machines. Was it fake or not? The years passed and the veracity of the existence of these hieroglyphs always left me suspicious. If that were true, it could change the course of history. I realized that it was real when a theory came up trying to refute the interpretation of these hieroglyphics. In the explanation, this would be a "palimpsest"! Ah, now it's explained! Briefly explaining, a palimpsest is an overlap of hieroglyphs, it would be writing over, causing a false image. When I first started planning the trip to Egypt, Abydos was one of the first places I marked on the map. And then finally came the day of seeing with my own eyes those mysterious figures on the walls of the temple. I will try to analyze here some details that are not normally seen on other blogs, books or TV shows and let each one reach its conclusion. The first thing that is evident is that there is no trace of any plaster that has hidden the hieroglyphics. They are hieroglyphs written on the stone beam that serves as support for the slabs. Observing the next hieroglyphs, whether on the left, on the right, or even on the opposite side of the flying machine figures, one clearly perceives that there was indeed the palimpsest practice in that temple, some even looking like scrawled drawings on top. The theory of the palmypsestos of Abydos seems to prove by the example of the hieroglyphs around that controversial drawing. Once again archaeologists are able to end a myth using their academic theories. Will it be? Something in the eyes of those less skeptical still prevents them from being convinced by these explanations. Even with the evidence that there really was palimpsest in the writings of Abydos, nothing explains the blatant "coincidences" of those specific figures. Why are flying machine-like figures concentrated (apart from the helicopter, are there 3 more ships in a row)? Why are they facing in the same direction (the inside of the temple)? Why are the overlapping of these specific scriptures not evident like the others? These questions tend to remain. There are many coincidences in a temple that is one of the oldest places of worship in the world. And if that was the only mystery of this temple ... but it is not ... I would discover much more!

This Technology Examples - ufos-the-temple-of-seti-i-abydos-egypt- on net.photos image has 1024x1024 pixels (original) and is uploaded to . The image size is 236755 byte. If you have a problem about intellectual property, child pornography or immature images with any of these pictures, please send report email to a webmaster at , to remove it from web.