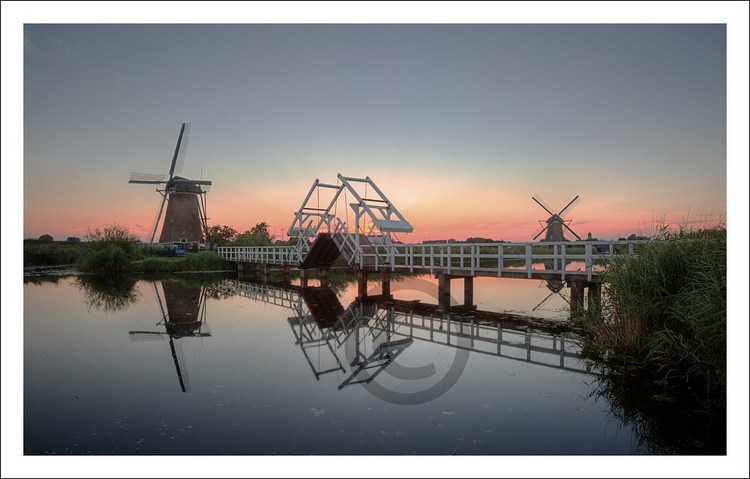 The Dutch windmills of Kinderdijk are a group of nineteen mills in the northwest of the Alblasserwaard, near the village of Kinderdijk (municipality Molenwaard). They are drainage mills to keep water out of the polder. The site illustrates all the typical features associated with this technology – dykes, reservoirs, pumping stations, administrative buildings and a series of beautifully preserved windmills. The windmills at Kinderdijk were built from the end of the fifteenth century, but the current windmills dating almost all from 1738 and 1740. With its realization an extremely ingenious hydraulic system was constructed, which still functions today and which through the ages made it possible to populate and cultivate a large peat area. It's nationally and internationally the largest concentration of old windmills and only example of this size. Therefore, it is one of the best-known Dutch tourist attractions. The mills are listed as national monuments and the entire area is a protected village view since 1993. The site is listed as a UNESCO World Heritage Site since 1997. The landscape surrounding the windmills is striking in its combination of its horizontal features, represented by the canals, the dikes, bridges and the fields, with the vertical rhythms of the mills. Technical stuff This HDR consists of 3 photos. The initial merge was done with Photomatix Pro. Further post-production was done with PS CC. It concerned cropping, color toning, vibrance, saturation, a little lens correction with regard to vignetting and adding a "©". So, please don't bother to send me an email or enter comments concerning the copyright symbol. Its - unfortunately - there to stay.

This Technology Examples - kinderdijk-at-dusk-2-3- on net.photos image has 1023x653 pixels (original) and is uploaded to . The image size is 105943 byte. If you have a problem about intellectual property, child pornography or immature images with any of these pictures, please send report email to a webmaster at , to remove it from web.