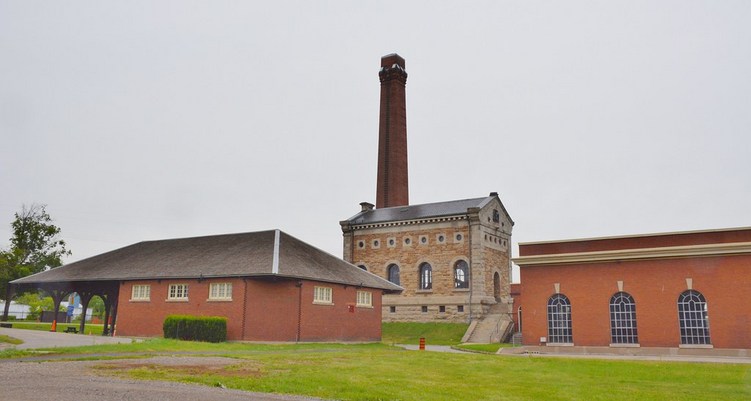 Excerpt from pc.gc.ca: Existing plaque: On wall between two buildings - left to small museum 900 Woodward Avenue, Hamilton, Ontario This dignified building, reminiscent of the style of a Roman aqueduct, houses one of Canada's greatest surviving engineering achievements of the mid-19th century, the Hamilton Waterworks. Built between 1857 and 1859, it was designed by the prominent Canadian engineer, Thomas C. Keefer. Its grand interior, dominated by giant cast-iron doric columns, houses steam engines cast by the nearby Dundas foundry. The pumphouse produced as many as five million gallons of water daily until 1910, when increasing demand and improved technology forced its retirement. Description of Historic Place Hamilton Waterworks National Historic Site of Canada is a gracious complex of mid19th-century brick industrial buildings located just west of the present City of Hamilton Waterworks on a narrow strip of land between Woodward Avenue and the Queen Elizabeth Way. The complex can be readily identified by its tall chimney and the distinctive Italianate profile of the original waterworks pumphouse. Heritage Value Hamilton Waterworks was designated a national historic site of Canada in 1997 because it is an early, rare surviving example of a Victorian industrial building complex that is both architecturally and functionally largely intact. The heritage value of Hamilton Waterworks National Historic site of Canada lies in its physical illustration of a Victorian industrial complex, in this case a municipal waterworks which survives as a rare representation of the Victorian use of industrial technology to improve quality of life. Value resides in the overall site, setting, design, materials and function of both the complex and its component parts, with particular emphasis upon those original to the 1859 waterworks. Hamilton Waterworks was designed by Thomas Coltrin Keefer and built by the City of Hamilton in 1856-1859. Its purpose was to deliver large quantities of clean water for safe drinking and fire control to the rapidly expanding city. The facility was upgraded to address the needs of the growing city in the years that followed: its original Gartshore pumps were replaced in 1882; a second pumping station was built in 1887; a third station with electric and steam turbine engines was installed in 1910-1913. When the complex itself was replaced by a new waterworks on adjacent land in 1970, several buildings in the original group were demolished. Today the early waterworks complex consists of the 1859 Pumphouse with its engines and equipment, an original Boilerhouse, Chimney and Woodshed (all 1859), the Worthington Shed (1910) containing a small steam pump, a second Pumphouse (1913), a Carpenter's Shed (1915), and a large number of in-ground valves and valve chambers dating mainly from the 20th century. The City of Hamilton has restored the original waterworks, and today it is open for public visitation. Character-Defining Elements Key elements that contribute to the heritage value of this site include: the location of the complex near lake Ontario at the edge of the city; the functional grouping of late nineteenth-century industrial buildings and structures (1859 Pumphouse, 1859 Boilerhouse, 1859 Chimney, 1859 Woodshed, 1910 Worthington Shed, 1913 Pumphouse, 1915 Carpenter's shed) with its distinctive profile created by the tall chimney, irregular building heights and roof profiles; the footprints and spatial distribution of buildings and structures; the Italianate architectural style of the 1859 Enginehouse/ Pumphouse with its rectangular massing on a raised basement under a pitched slate roof, entry on the short end, four bays of tall narrow windows and bull's eye windows on the side elevations, classically inspired detailing such as corner pilasters and dentilled cornice, and rusticated limestone construction; the functional design of the Pumphouse with its use of fireproof construction materials (limestone, slate, tin, interior brick facing, cast iron window frames) and large open volume with mezzanine; the matching architectural treatment of the 1859 Boilerhouse with its smaller, shorter massing under a hip roof, its arcaded side elevation, and containing its original engines and 1882 replacement pumps; the 1859 Woodshed with evidence of its original timber frame post and beam construction and single open volume, wood shake roofing the 1859 Chimney in its tripartite classical design with limestone pedestal, red brick shaft and cap; the integrity of post 1859 portions of this complex (Worthington Shed, 1913 Pumphouse, Carpenter's Shed) in their design and materials; clarity of the spatial and functional relationships between all of these buildings; the location, spatial disposition, materials and forms of machinery and component parts illustrative of the Woolf Compound design of the waterworks' original technology (such as the large cast iron walking beams, large cast iron flywheels, two-cylinder design including high and low pressure cylinders both arranged vertically and attached to the end of the walking beam, double acting and condensing operation, Watt's patent parallel motion linkage, integration of the pumphouse building and its machinery); the integrity of the materials, design, craftsmanship, function and location of the waterworks' original Gartshore engines (including their double beat poppet valve system, variable contour cam system, high quality machining and engine part detailing); the operational capability of various examples of steam technology on the site; archaeological evidence of other early buildings and structures (such as the 1859 chief engineer's house, 1859 assistant engineer's house, 1887 pumphouse, boilerhouse and machine shop, as well as coalsheds, rail sidings and associated equipment of various dates); the absence of intrusions between and among the buildings, structures and archaeological remnants on the site; viewscapes from the early complex to the adjacent present waterworks complex, to Lake Ontario and Burlington Bay.

This Technology Examples - hamilton-waterworks-national-historic-site-900-woodward-avenue-hamilton-on on net.photos image has 1024x547 pixels (original) and is uploaded to . The image size is 83086 byte. If you have a problem about intellectual property, child pornography or immature images with any of these pictures, please send report email to a webmaster at , to remove it from web.