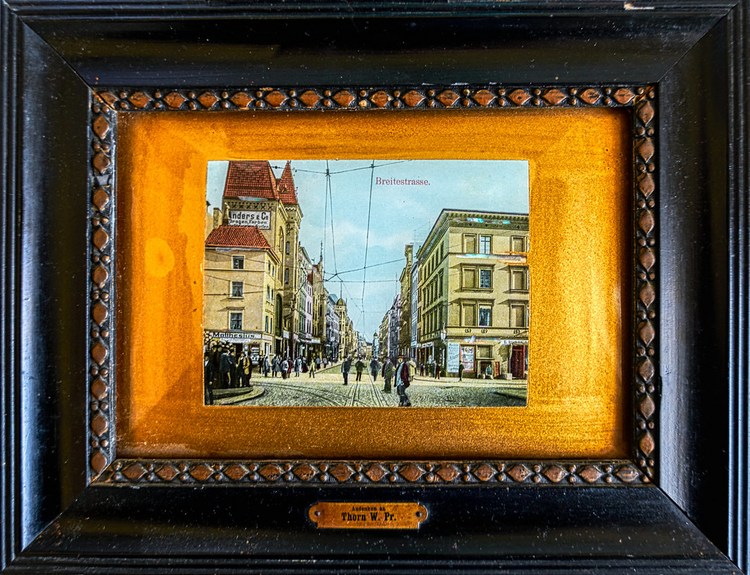 This is what I saw and bought without hesitation. A fine early example of German photo art. It is in its original frame, 12 x 9 cms, and beautifully presented. You can't really see it in my photograph, but the photo and glass covering it are curved convexly to give it the feel of 3D. This made it difficult to focus. There are little added highlights, such as the "mother of pearl" strips, that just add a little sparkle to the presentation. When I discussed it with proprietor Andrew Puccetti, he quite rightly pointed out that color photography (using a single plate) only technically became possible from 1906. But this shot had the feel of the 1890s to my (history) eye. For those who don't want to follow all the technical arguments and links I will provide to substantiate my claim, I'll tell you what I think this is and provide the information for geeks below. This is a genuine color print using the Photochrom technique pioneered by Photoglob Zurich AG, and indeed introduced to Germany around 1890 (details of the technique below). Thousands of copies were produced and sold, and the Germans were the world leaders in this technology. This photograph was taken as three separate monochrome negatives and then printed to form one colour image. Before and after this technology was developed, hand painted colourisation was going on. This picture shows evidence of hand retouching, especially of the faces looking towards the camera), but there is no indication that the overall photograph has been hand painted. That's exactly why Andrew Puccetti thought it must have dated from after 1906. As for identifying the location, the only clue I have to go on is printed on the photograph. "Breitestrasse". This is literally translated, "Wide Street". It's the German equivalent of "High Street" in Britain and Australia, or "Main Street" in America. As for the German city, I can only hazard a guess. ** Well there has been a development and positive ID of the city. Thanks to Gina Fuchs of Berlin, and also Jutta Achrainer, who tell me it is not Berlin, but rather something perhaps even more interesting from an historical perspective: "This picture shows the city of Thorn in West Prussia. (Thorn = City, W. = (West), Pr. = (Prussia) = belongs to Poland today. de.wikipedia.org/wiki/Landkreis_Thorn In your picture you see a street scene at the market place of Thorn. see also: deutsche-schutzgebiete.de/wordpress/projekte/kaiserreich/koenigreich-preussen/provinz-westpreussen/thorn/ I hope you're not too disappointed." On the contrary Gina and Jutta, the fact that this clearly shows the extent of the German Empire at the time and the reference to German speaking Prussia, reinforces the earlier date it would seem. Thank you. Some more pieces of evidence: * Another monochrome example from 1892 of a "Breitestrasse". www.flickr.com/photos/[email protected]/10761087045/ * Taschen (probably the most prestigious art publisher in the world) has released a magnificent book on German Photochroms from around 1900. www.taschen.com/pages/en/catalogue/photography/all/01137/... * This article also has some supporting information on Photochroms: en.wikipedia.org/wiki/Photochrom * Finally, on the history of colour photography try: blog.scienceandmediamuseum.org.uk/a-short-history-of-colo... Above all, if you see something like this in an antique shop. Buy it!!! I think I got a real bargain.

This Technology Examples - early-german-photo-art on net.photos image has 1024x785 pixels (original) and is uploaded to . The image size is 345463 byte. If you have a problem about intellectual property, child pornography or immature images with any of these pictures, please send report email to a webmaster at , to remove it from web.