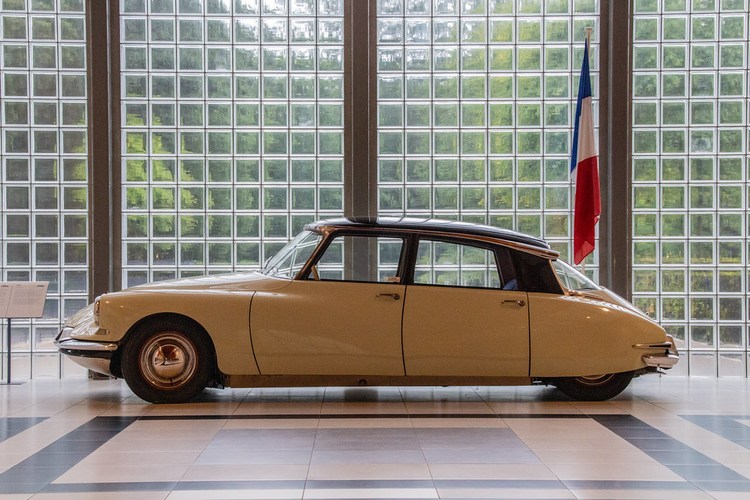 With regard to design and technology, this car was revolutionary. When it was introduced in 1955 the Citroën DS went against all the design conventions of the time and immediately acquired iconic status. The car was also very advanced technically, with front-wheel drive, hydro-pneumatic suspension and hydraulic control of the brakes, clutch, gearbox and steering. It was also the first mass-produced car fitted with disc brakes. There was no conventional brake pedal, but a sort of small cushion-like button-switch on the floor, affectionately known as the ‘champignon’ (mushroom). For drivers who were not used to it, it was difficult to gauge the pressure required. The Citroën DS on display in the museum is identical to the model that was introduced in Paris in 1955. Early models such as this had a distinctive fibreglass roof to reduce the weight of the car. In 1956 a simpler version, the ID, was introduced and the Pallas, a more luxurious version, followed in 1964. In 1968 the car’s front was redesigned and it was fitted with headlights that swivelled with the steering wheel. Production of the Citroën DS ceased in 1975 after approximately 1.5 million examples had been produced. Ironically, only few people know the name of the designer of the Citroën DS; it was the Italian Flaminio Bertoni, chief designer at Citroën at the time.

This Technology Examples - 1956-citro-n-ds-19 on net.photos image has 1024x683 pixels (original) and is uploaded to . The image size is 241993 byte. If you have a problem about intellectual property, child pornography or immature images with any of these pictures, please send report email to a webmaster at , to remove it from web.