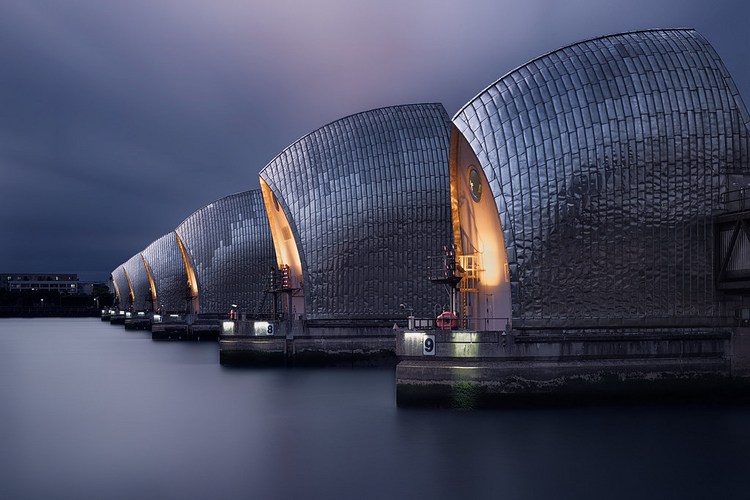 The Weight of the World

I last photographed the Thames Barrier a little over a year ago, but became inspired to revisit the location after coming across an article about the 1953 North Sea Flood, which overwhelmed British sea defences in the Thames Estuary and led to the deaths of more than 300 people across several counties. It was remarkable to read that the gates protect not only the immediate East London borough against tidal surges, but also the infratructure, underground network and power supplies stretching beyond the O2 Arena, the Docklands and Tower Bridge and all the way to Westminster. In addition to this, the barrier now also needs to contend with the impact of climate change and rising sea levels. With all of this in mind, my aim with this image was a darker, moodier and altogether more sinister alternative to my last take on the location, capturing the formidable size and scale of the barrier's piers at dusk, but also contrasting the peaceful flow of the Thames and the reassuring glow of the piers' evening lights with the foreboding tones of the evening sky. The final image is a blend of a dozen exposures captured over two hours, starting with a 90-second exposure as the sun was setting and continuing into the evening, at which point the shutter speed had extended to 12 minutes. My intention all along had been to weight the emphasis on the later exposures, but I knew I would also be using the earlier and brighter exposures to enhance the lighting across the roof of the piers and the tones along the Thames. Having created Pen Tool selections in Photoshop for the barrier's piers, the sky and the river, I blended in portions of each of these exposures using a combination of Soft Light, Lighten, Luminosity, Linear Dodge, Colour Dodge and Screen blend modes. The goal at this stage was to bring out the reflective finish and dimensionality along the tip of the piers, to emphasise the glow of the lights inside the barrier, to produce a clean finish in the concrete at the base of each pier, and to brighten the water and darken the sky. After blending the exposures, I applied a gentle radial blur to the sky and used Silver Efex Pro to lower its midtone structure and soften its texture, creating a subtle contrast between the piers and their surroundings. I then used Colour Efex Pro to add some minor tonal contrast adjustments, with a gentle Detail Extractor to bring out the gritty nuance in the piers. The final touches were a combination of a Gradient Map to emphasise the chilly evening tones and a Colour Lookup set to Bleach Bypass to desaturate the tip of the piers, which helped to bring out their metallic texture and to add some definition to their background. The end result involved more planning and attention to detail at both the shooting and editing stages than my previous take, but it hopefully brings out the immense feat of engineering behind the barrier's design, as well as the rock-steady industrial strength of the barrier against a sometimes menacing force of nature, which was the aspect that inspired me to revisit the location in the first place. You can also connect with me on Facebook, 500px, Google+ and Instagram.

This Technology Definition - the-weight-of-the-world on net.photos image has 1024x683 pixels (original) and is uploaded to . The image size is 160592 byte. If you have a problem about intellectual property, child pornography or immature images with any of these pictures, please send report email to a webmaster at , to remove it from web.