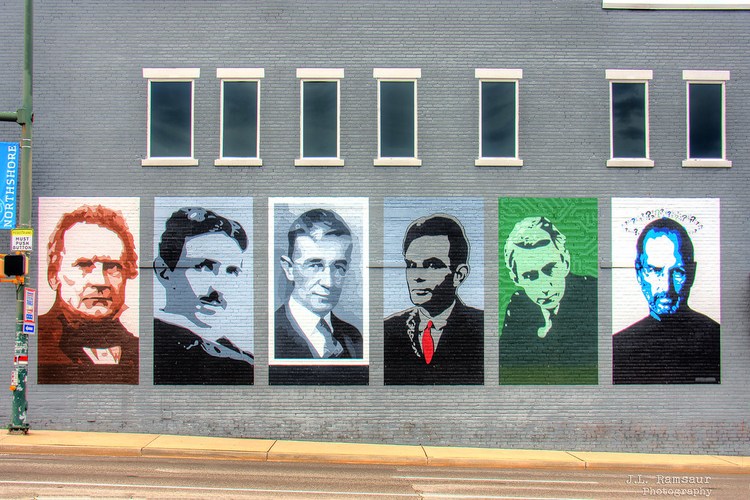 Chattanooga is a city steeped in the arts, and at the corner of Tremont Street and Frazier Avenue, art meets technology. A mural painted by Chattanooga artist Kevin Bate features six founding fathers of technology: Charles Babbage, Nikola Tesla, Vannevar Bush, Alan Turing, Claude Shannon and Steve Jobs. The mural was commissioned by Woople, a Web-based e-learning company based in Chattanooga. Contributors & their contributions (left to right): Charles Babbage - an English polymath who was a mathematician, philosopher, inventor and mechanical engineer. Babbage originated the concept of a digital programmable computer and is considered by some to be "father of the computer". Nikola Tesla - a Serbian-American inventor, electrical engineer, mechanical engineer, and futurist best known for his contributions to the design of the modern alternating current (AC) electricity supply system. Vannevar Bush - an American engineer, inventor and science administrator, who during World War II headed the U.S. Office of Scientific Research and Development (OSRD), through which almost all wartime military R&D was carried out, including important developments in radar and the initiation and early administration of the Manhattan Project. He emphasized the importance of scientific research to national security and economic well-being, and was chiefly responsible for the movement that led to the creation of the National Science Foundation. Alan Turing - an English mathematician, computer scientist, logician, cryptanalyst, philosopher, and theoretical biologist. Turing was highly influential in the development of theoretical computer science, providing a formalization of the concepts of algorithm and computation with the Turing machine, which can be considered a model of a general-purpose computer. Turing is widely considered to be the father of theoretical computer science and artificial intelligence. Claude Shannon - an American mathematician, electrical engineer, and cryptographer known as "the father of information theory". Shannon founded information theory with a landmark paper, "A Mathematical Theory of Communication", which he published in 1948. Shannon also contributed to the field of cryptanalysis for national defense during World War II, including his fundamental work on codebreaking and secure telecommunications. Steve Jobs - an American business magnate, industrial designer, investor, and media proprietor. He was the chairman, chief executive officer (CEO), and co-founder of Apple Inc.; the chairman and majority shareholder of Pixar; a member of The Walt Disney Company's board of directors following its acquisition of Pixar; and the founder, chairman, and CEO of NeXT. Jobs is widely recognized as a pioneer of the personal computer revolution of the 1970s and 1980s, along with his early business partner and fellow Apple co-founder Steve Wozniak. Three bracketed photos were taken with a handheld Nikon D7200 and combined with Photomatix Pro to create this HDR image. Additional adjustments were made in Photoshop CS6. "For I know the plans I have for you", declares the LORD, "plans to prosper you and not to harm you, plans to give you hope and a future." ~Jeremiah 29:11 The best way to view my photostream is through Flickriver with the link below: www.flickriver.com/photos/photojourney57/

This Technology Companies - significant-contributors-to-science-technology-mural-chattanooga-tennessee on net.photos image has 1024x683 pixels (original) and is uploaded to . The image size is 332603 byte. If you have a problem about intellectual property, child pornography or immature images with any of these pictures, please send report email to a webmaster at , to remove it from web.