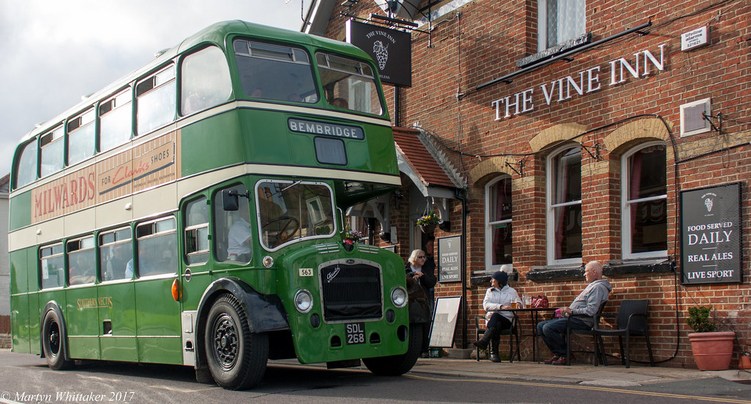 Taken From: www.iwbusmuseum.org.uk/2013/02/bristol-ld6g-563-sdl-268/ Many bus operating areas were beset with low railway bridges that prevented the use of full height double-deckers. In the early post-war period, large numbers of “lowbridge” buses entered service, while this achieved an overall height up to 15” less than ‘highbridge’ vehicles, it necessitated an awkward upper deck seating arrangement of four across bench seats and a sunken gangway on the offside, which protruded into the lower saloon. In 1949, Bristol and Eastern Coach Works produced their experimental Lodekka design on a vehicle for Bristol Tramways. This featured a low chassis, with virtually flat floor, and drop-centre rear axle to achieve low height but with a conventional seating layout on the upper deck. A second prototype was built for West Yorkshire Road Car soon after and both buses were demonstrated to many other Tilling group companies. Southern Vectis was not included in the initial demonstration programme but did receive one of the pre-production batch built in 1953. Hants & Dorset’s 1337 (LRU 67) was used from Newport Depot for several weeks and orders for Lodekkas followed. Southern Vectis received 65 vacuum braked LD6G Lodekkas between 1954 and 1959, followed by another 9 air-braked versions in 1960-2, these being designated FS6G. All were equipped with Gardner 6 cylinder engines and 4 speed constant mesh gearboxes. 563 was one of the 1959 deliveries, the batch being 560-4 (5 vehicles) and was the penultimate open rear platform Lodekka delivered new to the company. Lodekkas appeared on almost every route on the Island and worked from all depots and outstations. Initially they were for fleet expansion, branch line rail replacement and to oust pre-war survivors. The last deliveries were to replace early post-war K type lowbridge double deckers. 563, which had some winter use as a driver trainer, was amongst the last rear loading Lodekkas to survive with SVOC and upon disposal, was sold to Richard Newman for preservation and repainted in Tilling green having latterly carried NBC’s leaf green livery. In 1986 was hired back to SVOC for the “Vintage Fleet” initially operating on Ryde-Cowes (svc 1A). Over successive years it was moved to various other routes including Ryde – Havenstreet – Newport – Carisbrooke Castle (svc 3), Ryde – Bembridge – Shanklin – Newport (svc 8) and Ryde – Blackgang via Merstone (svc 43) before it was decided to cease the workings after the 1996 season. 563 (last used in 1995) was repainted prior to being returned to preservation and then became part of the display at The Isle of Wight Bus & Coach Museum. It has been a regular performer at rallies and events including visits to Winchester for the King Alfred Running Day, Alton, HCVS London to Brighton run and a return to Lowestoft, the home of ECW in 2012. Vehicle Details/Specification: Bristol Lodekka LD6G, Chassis No.150147 Body: ECW, No. 11019 Key dates: New in Tilling green & cream livery – June 1959 Hopper side windows replaced with sliding windows to improve ventilation – 1960 Repainted in National Bus company Leaf green & white – unknown Withdrawn – September 1979 Repainted into original Tilling green & cream and sold to Richard Newman for preservation – December 1980 Hired to Southern Vectis for service in vintage fleet – August 1986 Withdrawn – September 1995 Repainted in original Tilling green & cream and returned to R. Newman – unknown Displayed at The Isle of Wight Bus & Coach Museum – unknown Current Status: Restored and operational

This Survivor Season 43 - bristol-ld6g-sdl-268-at-the-vine-inn-st-helens on net.photos image has 1024x551 pixels (original) and is uploaded to . The image size is 244088 byte. If you have a problem about intellectual property, child pornography or immature images with any of these pictures, please send report email to a webmaster at , to remove it from web.