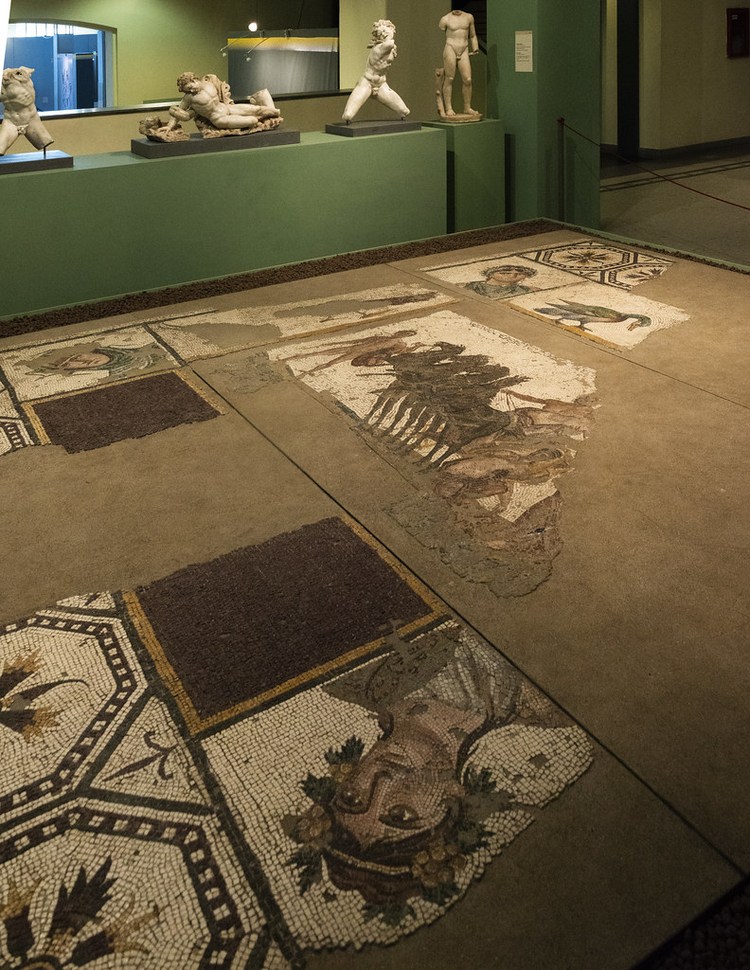 Mosaic with Rape of Proserpina and busts of the Seasons - I

This large mosaic probably paved the floor of the upper chamber of a tomb that was discovered (and immediately destroyed) in 1885 in the Vigna Pia area, on the Via Portuense. It is a polychrome “opus tesseIlatum” made of small tesserae cut from marble, other stones and glass paste. The composition is made up of multiple panels. The corner ones depict busts of the four Seasons. Stylized floral-geometric motifs are contained in octagonal frames; other panels depict animals and plants. The central panel depicts the crucial moment when Proserpina (Persephone in Greek) is abducted by Pluto (Hades) , the god of the Underworld. Standing in his speeding four-horse chariot, he seizes the maiden to carry her off into the land of the dead and make her his divine bride. Mercury, in front of the chariot, is leading and holding back the galloping horses (their names are written in Greek above their heads.) The explicit funerary symbolism of this scene is underlined by the presence of another theme widely depicted in Roman sepulchral art: the four Seasons, which represent life’s endless renewal. Spring (in the upper left corner) is wearing a greenish-blue tunic and a garland of ﬂowers and leaves. The whole Summer panel is lost. Autumn, in the lower right corner, is wearing a gray-green tunic and the pelt of a wild animal; her hair is wreathed with vine leaves and bunches of grapes bound by a ribbon. Winter is wrapped ina green cape; the leaves of marsh plants adorn his head. All these elements are closely interrelated in a structured Symbolic ensemble. The diagonal positions of the Seasons, and the fact that they are all looking toward the central panel, highlight its mythological subject, the real focus of the composition. The alternation of yellow, red and black in the motifs in the octagons likewise conveys the idea of rotation, of circular motion, of the regular, eternal recurrence of the seasons, of the slumber and rebirth of the forces of nature. Their succession becomes a metaphor of life without end, of victory over death, of serene continuity through time. Roman polychrome mosaic L. 3,4 m; W. 3.0 m Mid-second century AD. Rome, “Via Portuense”, area “Vigna Pia” Musei Capitolini, Centrale Montemartini, inv. MC 1235

This Succession Season 3 - mosaic-with-rape-of-proserpina-and-busts-of-the-seasons-i on net.photos image has 792x1024 pixels (original) and is uploaded to . The image size is 263808 byte. If you have a problem about intellectual property, child pornography or immature images with any of these pictures, please send report email to a webmaster at , to remove it from web.