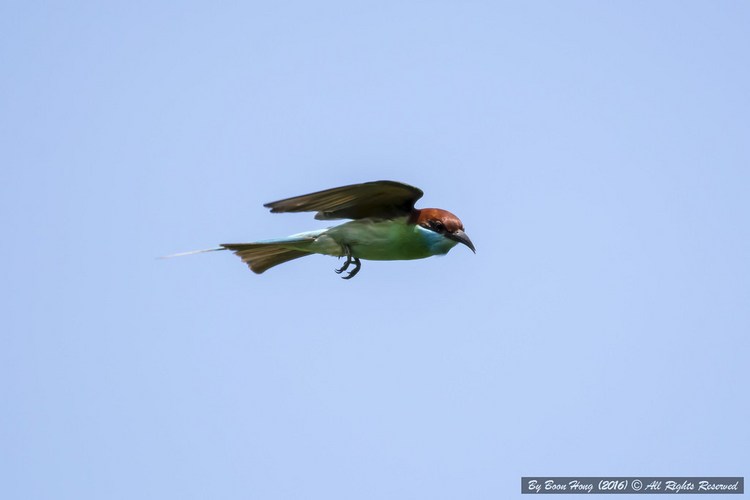 Blue-throated Bee-eater (Merops viridis) Main features: Small (27-28cm), chocolate head, nape and upper back contrasts with blue throat; long central tail streamers (9cm). Genders look alike. Juvenile: Duller; chocolate cap replaced by green; throat green rather than blue; lacks elongated central feathers. Call: Described as a liquid be-rek, be-rek; terrip-terrip. Alarm call is a sharp chip. In flight: Metallic pale rump contrasts with darker blue upper tail. Similar birds: Blue-tailed Bee-eater (M. philippinus): Has e rufous throat; lacks the chocolate head and back of the Blue-throated. Both have a long blue tail, similar call and look similar in flight, although the Blue-tailed glides more. Status in Singapore: Common resident and uncommon winter visitor throughout the island and to North and South offshore islands. World distribution: East and Southeast Asia including Java and Borneo. Classification: Family Meropidae. World 26 species, Singapore 2 species. The Malay name is berek berek which is the sound of its call. Bee-eaters get their names from their diet of stinging insects (bees, wasps, hornets, ants). They specialise in catching and neutralising these titbits that other birds find unappetising or dangerous. But Bee-Eaters also catch and eat other harmless insects especially dragonflies, and also grasshoppers, butterflies. Occasionally, they may eat small lizards and fish. Bee-eaters catch their prey on the wing. They look out for suitable prey from a tree branch or high wire (about 7m and above) then swoop down onto it. They snap up their victims with an audible click, their long, narrow bills keeping these dangerous prey a good distance away from the eyes. To get rid of the sting, the insect is vigorously whacked against the perch. Or simply squeezed to get rid of the venom. Bee-eaters are said to be attracted to smoke; to snap up insects driven out as land is cleared by fire for agricultural use. Blue-throated Bee-eaters forage over the canopy of lowland forest, but also over mangroves, and relatively open habitats such as grasslands, marshes, beach scrub and even gardens and urban areas. Blue-throated Bee-eaters usually forage in pairs, sometimes in small groups, rarely above 15. But they may gather in flocks to hawk on swarming insects (termites, ants), together with Swifts and Swallows. But they roost together in trees in mangroves and forests. Breeding Bee-eaters court by flickering their tails and puffing out throat feathers. The female may initiate courtship. When the males initiate, they usually offer their mates a snack of an insect, sometimes feeding several insects in succession. The male bows a few times before he mates. Bee-eaters nest in small colonies, usually of 5-20 pairs, but can reach as many as 1,000. They tunnel out a nest and prefer light sandy soil that allows good drainage; including beach dunes, sand quarries, even lawns, golf courses and air fields! Few colonies are found on vertical surfaces; instead, they prefer level ground or a low, shallow slope. On level ground, the tunnel slopes down sharply, levels off and may then rise slightly upwards again. The burrows are about 7 cm wide and 1-3 m deep and the nest chamber is about 20 x 45 cm and unlined. Both parents share tunnelling duties, using their bills and feet to dig. One keeps a look out while the other digs. More than one tunnel may be dug before egg-laying starts. Heavy downpours may cause a colony to abandon a site and re-start elsewhere. 3-6, usually 4, white eggs are laid. Both parents incubate the eggs, which is done as soon as they are laid so the hatchlings emerge at different times. If food is not abundant, the older siblings kill the younger ones with their sharp hooked bills. Usually only 1-2 survive to fledge about 30 days later. The young stay in their tunnel nests a few weeks after fledging. Both parents feed the young, choosing large dragonflies, rather than stinging insects. In Singapore, Blue-throated Bee-eater nesting colonies are not easily located. Migration The Blue-throated Bee-eater breeds in Singapore and the Malay peninsula in April-September, then strangely migrates to Indonesia thereafter. At the time when they leave, the Blue-tailed Bee-eater arrives. They are probably the only bird to breed here and migrate away during the non-breeding season. They migrate in small groups of not more than 15. In Singapore, they are found in scrub, mangrove, forest, cultivated areas. Status and threats Blue-throated Bee-eaters are not considered at risk in Singapore. Although nesting sites of Blue-throated Bee-eaters are affected by human interference, they adapt by nesting in smaller groups or even in lone pairs. [Credit: www.naturia.per.sg/]

This Succession Season 3 - blue-throated-bee-eater-merops-viridis-_dsc3917-1 on net.photos image has 1024x683 pixels (original) and is uploaded to . The image size is 32825 byte. If you have a problem about intellectual property, child pornography or immature images with any of these pictures, please send report email to a webmaster at , to remove it from web.