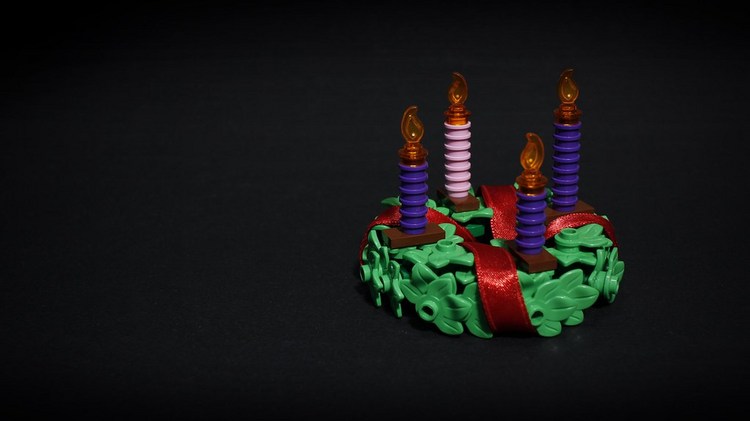 Merry Christmas! Since 2010, I've built some sort of Christmas themed MOC each year and this year, I decided to go with an Advent Wreath. Advent Wreaths are a Lutheran tradition, but have also spread to other Christian denominations, that symbolize the passage of the four weeks of Advent leading to Christmas, and one has been present at my church where I grew up each year. Each candle is lit in succession with the passage of each week and are a representation of a value: Hope (Week 1, Purple), Peace (Week 2, Purple), Joy (Week 3, Pink), and Love, (Week 4, Purple). We've finally hit Week 4 (Weeks still start on Sundays, so even if Christmas was Monday, the fourth candle wouldn't have been lit until the day before, making it a pretty short week, but a week nonetheless.), so you know, I hope you've found some peace this season, it is a joyous time, and I love you all, especially for putting up with my frogracers this year. Merry Christmas! Oh, and that ribbon is from this, so it is purist. BONUS!

This Succession Season 3 - advent-wreath on net.photos image has 1024x575 pixels (original) and is uploaded to . The image size is 52919 byte. If you have a problem about intellectual property, child pornography or immature images with any of these pictures, please send report email to a webmaster at , to remove it from web.