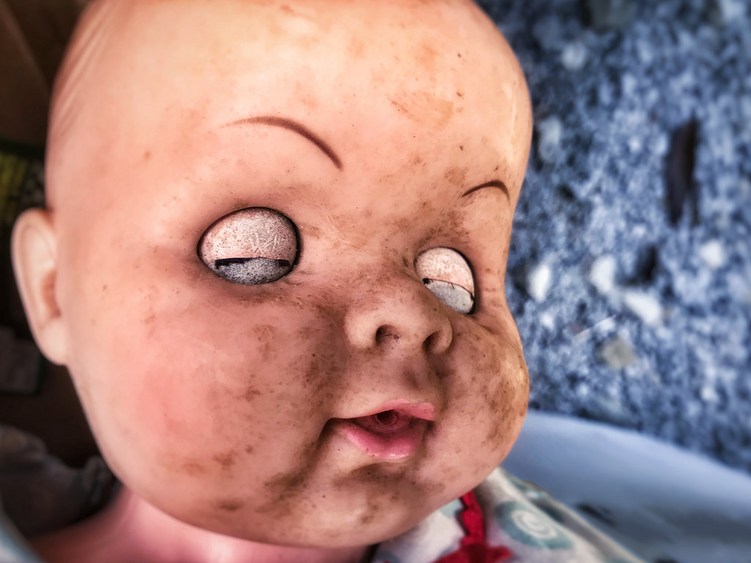 Series Conclusion... I suppose this is a fitting place to conclude the doll series. It's not for a lack of photos. I documented many more tiny sad faces. But I think the story has been adequately told and it's time to move on. I knew from day one the series would end with this doll. There were more weathered dolls. And certainly scarier dolls. The compelling feature of this one was an eerie blend of utter resignation to circumstances while somehow being okay with it. Such subtlety in the contours of the lips, cheeks and mouth, all suggestive of happier times while the face itself revealed the ravages of neglect. Even the eyebrows convey a sense that all is not lost, even though all clearly is. And again the jarring juxtaposition of overall harshness against the comforting softness of the pajamas. I love seeing these sort of visual conflicts in photos. It's such an ingrained thought process that I often capture it without even realizing it until post processing. Definitely the case here, and even a third layer with the pajamas being sandwiched (visually) between the blemished, haggard face and the cold, cruel gravel in the background. It's been nearly three weeks since I shot these photos, but already it feels like three months. It's been that way all year; the way life keeps coming at me on a daily basis has caused a distortion in the perception of time and space. The dolls occupied my attention on an perversely intense level, but that energy quickly transferred to the next thing, followed by the thing after. The succession seems dizzying at times. It's not just me; I've heard this feeling echoed by others.

This Succession Cast - post-mortem on net.photos image has 1024x768 pixels (original) and is uploaded to . The image size is 139808 byte. If you have a problem about intellectual property, child pornography or immature images with any of these pictures, please send report email to a webmaster at , to remove it from web.