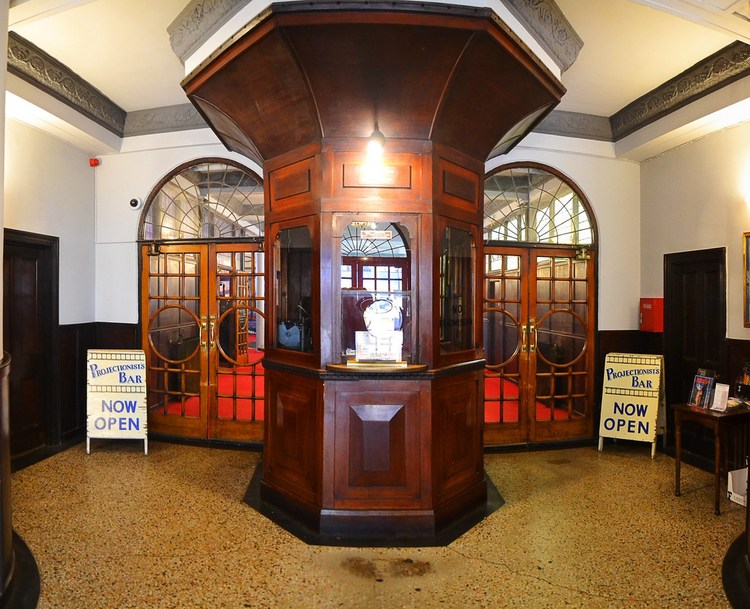 A box office or ticket office is a place where tickets are sold to the public for admission to an event. Patrons may perform the transaction at a countertop, through a hole in a wall or window, or at a wicket. By extension, the term is frequently used, especially in the context of the film industry, as a synonym for the amount of business a particular production, such as a film or theatre show, receives. Box office business can be measured in the terms of the number of tickets sold or the amount of money raised by ticket sales (revenue). The projection and analysis of these earnings is very important for the creative industries and often a source of interest for fans. This is predominant in the Hollywood movie industry. This Box Office is in the Dome Cinema, Worthing, West Sussex, England, and is a grade II* listed building owned by PDJ Cinemas Ltd. The Dome Cinema, which has three screens and a Projectionist's Bar is run by PDJ Cinemas, while Alfresco Services run two function rooms and the cafe at the front of the building. It has closed for refurbishment several times, most recently between December 2005 and July 2007. The name derives from the distinctive dome on top of a three-storey tower over the entrance. The Dome is an Edwardian building and one of the oldest working cinemas in England, and was opened in 1911 (Brighton's Duke of York's Picture House was opened in 1910). It was opened by Swiss impresario Carl Adolf Seebold. It was originally named The Kursaal — a German word translating as "cure hall". The Kursaal was used as a health centre and entertainment complex by visitors to the seaside town. At the time it contained the Coronation Hall, which was used for roller skating, exhibitions, concerts and events, and the Electric Theatre, the first cinema run for paying audiences in West Sussex. Following the outbreak of World War I leading residents of the town objected to the German name and after a competition with a prize of £1, the Cinema was renamed "The Dome". After the end of World War II the Dome went into a steady decline due to heavy competition. In 1949 Seebold restructured his company and remarried. He continued to run the new business, The Rivoli and Dome Ltd, until his death in 1951.[7] By 1955 the Dome was badly out of date and required a refit. The new owners hired architects Goldsmith and Pennells to install a new cinemascope screen. Although the rise of television and sharing the area with four other cinemas must have added financial pressure, the Dome survived to see its sister cinema, The Rivoli, burn down in 1960. Since the reopening in 2007, The Dome Cinema has continued to run as a successful, fully independent cinema (run entirely separately to the Worthing Borough Council owned Connaught Theatre). The projection ran on two 35mm Cinemeccanica projectors (a Victoria 8 in Screen 1 and a Victoria 5 in Screen 2) until October & November 2012, when both screens were converted to fully digital. Screen 1 now runs on a NEC 2000C, Screen 2 on a NEC 1200C and Screen 3 runs a Barco DP2K-6E. The last 35mm film played in Screen 1 was Looper, and the first digital film was Skyfall. The Victoria 8 Cinemeccanica projector from Screen 1 is now on display in their Projectionist's Bar. Before adding a third screen in 2018, the Dome was one of the busiest 2 screen cinemas in the country. The cinema runs a range of different shows for the local area. Currently running are Weekend Morning Movies, Parent & Baby Screenings, Autistic Screenings, Disability Screenings, Midweek Matinees and subtitled screenings. They also run occasional live broadcasts. en.wikipedia.org/wiki/Box_office en.wikipedia.org/wiki/Dome_Cinema,_Worthing

This Successful Synonym - box-office on net.photos image has 1024x832 pixels (original) and is uploaded to . The image size is 290951 byte. If you have a problem about intellectual property, child pornography or immature images with any of these pictures, please send report email to a webmaster at , to remove it from web.