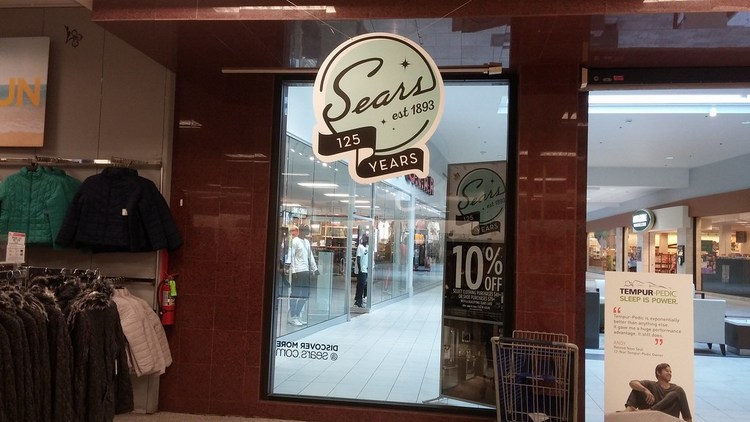 Key words I was looking for in the official statement: "Holdings will also close 142 unprofitable stores near the end of the year. Liquidation sales at these stores are expected to begin shortly. This is in addition to the previously announced closure of 46 unprofitable stores that is expected to be completed by November 2018." In other words... not 'lights out, doors locked as of Monday morning' situation like some reports had suggested with the word "immediate." The full press release is available on the SHC website. More to come, of course. I'll edit this description again tomorrow afternoon. EDIT: I suppose there's not much to add at this point, besides the list of closures has been released - see the link in the comments below. Locally, Sears is closing its location at Wolfchase Galleria in Cordova (Memphis). The Southland Mall location will remain open, as will the Sears in Tupelo, MS (which is where the above picture was taken, btw. I didn't do a stour here however, and moreover do not intend to do so.) Elsewhere, I'm a bit surprised that some locations *aren't* closing, such as the aforementioned Tupelo Sears (and/or the Meridian Sears), or the Gulfport Kmart, since those are the only three SHC stores left in the entire state of Mississippi. On the plus side, I guess that means that those stores must be profitable, considering the 142 announced closing locations are unprofitable or only marginally profitable. And to be sure, the company is indeed exiting some other states with this round, which of course is entirely expected. I am personally curious to know if the fact that some stores are leased back from Seritage played any role in the selection of closing stores; 33 Seritage stores are on the closing list (including Wolfchase) out of what I believe are 70-something total. (The exact number can be found on Seritage's website, in the letter from their CEO posted in response to SHC's bankruptcy.) The sales are expected to continue into December (although I'm not sure whether or not they will run through the holidays themselves), with the stores closing before the end of the year. The ongoing round of August-announced closures, meanwhile, do not appear to be affected by the filing; a call to one of those stores this morning netted a response that they will be closing a few days after Thanksgiving, as planned. Local media have finally put up articles pertaining to the Wolfchase store's closure... and the MBJ (if not others as well; I haven't checked) erroneously states that two other Sears stores remain in Memphis. That's wrong: one is a Hometown store. Those aren't owned by SHC. They are separate. That shouldn't be that hard for reporters to figure out. The article also calls Eddie Lampert the former CEO of the company, which - as of the filing - is correct, since he has indeed stepped down as CEO... but also somewhat misleading, because it doesn't mention that he will remain in the capacity of chairman (effectively making it sound like he's leaving the company altogether, which is very far from the truth, as we all know). Come on, guys. LINKS: SHC Official Statement - searsholdings.com/press-releases/pr/2116 SHC Official Closing List - searsholdings.com/docs/101518_store_closing_list.pdf SHC Court Documents - restructuring.primeclerk.com/sears/Home-DocketInfo Seritage CEO Letter - ir.seritage.com/Cache/1001244146.PDF?O=PDF&T=&Y=&... (c) 2018 Retail Retell These places are public so these photos are too, but just as I tell where they came from, I'd appreciate if you'd say who :)

This Stores open on Thanksgiving - sears-holdings-files-for-bankruptcy on net.photos image has 1024x576 pixels (original) and is uploaded to . The image size is 134613 byte. If you have a problem about intellectual property, child pornography or immature images with any of these pictures, please send report email to a webmaster at , to remove it from web.