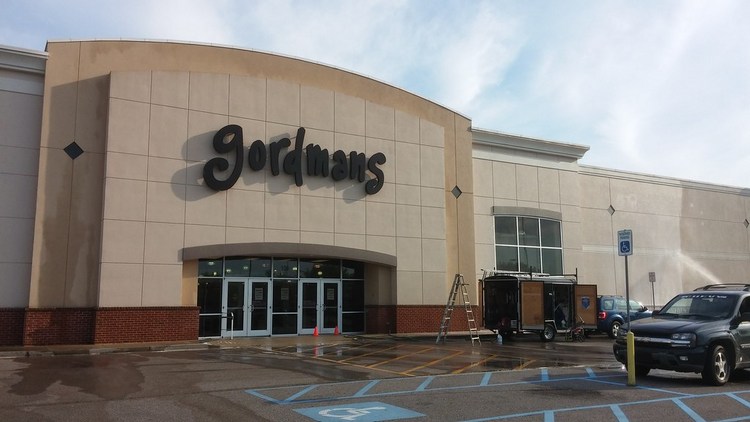 Retailer resurrected, but I have my reservations

Given that the liquidation of all products also saw all fixtures for sale, it remains to be seen just how exactly Southaven is able to reopen so quickly; perhaps not many of its fixtures actually sold off and they've just been sitting around, as l_dawg2000 has suggested to me, or alternatively, fixtures from one of the three stores this location has now effectively “traded places” with were shipped over (though I doubt the logistics of that would've worked out very well). I was hoping to take a closer look inside the front doors to see what all, if any, has changed on the interior, but with these crews working, I didn't want to seem more suspicious than I already did. (Yep, that's a good power-washing taking place in this pic: about darn time!!, guess all it took was the store closing and reopening XD See the before here, and also note the purple accents are now painted gray.) Even though Gordmans is reopening, however, I don't expect it to be exactly the same as it was the first time around. First of all, there's the matter of the positions now all needing to be refilled: many former employees have likely found new jobs already, and I'm sure others frankly wouldn't want to come back to work here given the circumstances (if you were laid off from a place that was closing, only for it to reopen, would you want to come back?). Similarly, they're running the risk of alienating past customers, who may interpret this reopening as a sign that the liquidation was simply a gimmick (and for all I know, maybe it was!). Then on top of all that, there's the whole merchandise deal: it sounds like Stage will be taking Gordmans in a bit of a different direction, making it more of an off-price chain, so we'll see how that works out. If it doesn't, there's always the chance that this store could liquidate and close again, which would definitely be unfavorable. Overall, I can't deny that I'm glad to see this store reopen – STC must have a thing for retailer resurrections, since Sportsmans Warehouse across the mall did the exact same thing before, as l_dawg reminded me! (although in that case, it was closed for years, not just a mere month) – but I think I'm more happy simply to see the space being retenanted, more so than I am to see Gordmans returning specifically, since as you can tell, I have some reservations about how this second chance at life for the Southaven Gordmans will ultimately work out... Sadly, I won't be able to make the June 29th grand reopening, but I do hope to return to this store soon after that just to see what's changed (if anything). And now that it'll be back in business once more, I'll also likely pop in from time to time as it suits me: you know, like normal :P If I see majorly drastic changes, I'll get some pictures (heck, I'll probably get some regardless knowing me!), but I won't be able to post them until this fall at the earliest. Nevertheless, be sure to stick around for my final photoset from the liquidation next weekend, which will definitely be looked at and written about from a different perspective now... (...wow, okay, it looks like I wrote a whole essay for this thing... sorry everyone XD ) Gordmans (former Gordmans!) // 100 Towne Center Loop, Southaven, MS 38671 (c) 2017 Retail Retell These places are public so these photos are too, but just as I tell where they came from, I'd appreciate if you'd say who :)

This Sportsman Warehouse Near Me - retailer-resurrected-but-i-have-my-reservations on net.photos image has 1024x576 pixels (original) and is uploaded to . The image size is 104423 byte. If you have a problem about intellectual property, child pornography or immature images with any of these pictures, please send report email to a webmaster at , to remove it from web.