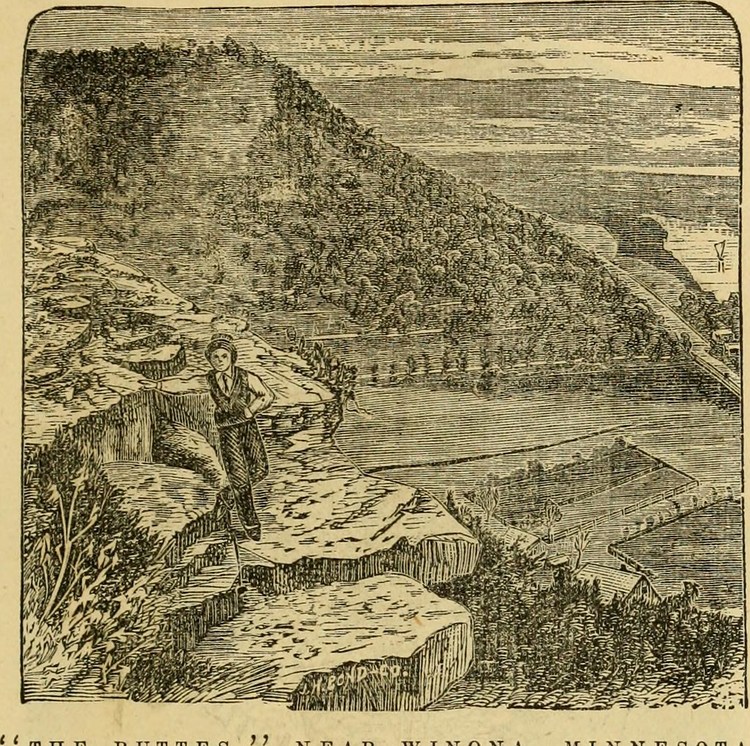 Image from page 126 of "The sportsman's and tourist's guide to the hunting and fishing grounds and pleasure resorts of the United States and Canadian provinces .." (1880)

Identifier: sportsmanstouris00suyd Title: The sportsman's and tourist's guide to the hunting and fishing grounds and pleasure resorts of the United States and Canadian provinces .. Year: 1880 (1880s) Authors: Suydam, Charles, [from old catalog] comp Subjects: Hunting Fishing Publisher: New York, C. Suydam Contributing Library: The Library of Congress Digitizing Sponsor: Sloan Foundation View Book Page: Book Viewer About This Book: Catalog Entry View All Images: All Images From Book Click here to view book online to see this illustration in context in a browseable online version of this book. Text Appearing Before Image: of this rock is cutand split into fantastic shapes, many of thefragments resembling castles, towers, and tur-rets. A few miles from this rock is Fortifica- ffUNTmO AND FISHLVG GROUNDS AND PLEASURE RESORTS. 115 tion Rock, which rises perpendicularly severalhundred feet. At The Dalles, this river iscotDpressed for five or six miles between redsandstone blufls, averaging over one hundredfeet in height. The principal lakes are LakeWinnebago, in the southeastern portion of theState, which is about thirty miles long by tenwide, and communicates with Green Bay (anarm of Lake Michigan) through Pox or Nee- and steamers, and on the shores of several areclub houses and summer hotels. Koshkonong Lake is one mile from the vil-lage of Koshkonong, and is six miles wide andnine miles long. It is well slocked with blackbass, pickerel, pike, yellow and silver perch,&c. Geese, ducks, brant, and swans are un-usually plentiful in their season. Of ducks, thevarieties consist of canvas backs, red-heads, Text Appearing After Image: THE BUTTES, NEAR WINONA, MINNESOTA.Accessible from Chicago via Chicago & Northwestern Railway. nah River—Hereon Lake, Devils Lake, LakeKoshkonong, Lake Geneva, Lake Zurich, andthe four lakes around Madison; these are thelarger lakes of this lake-studed State. Alongnearly all the rivers of the State, and at their heads, hundreds of little lakes are found,1 ke gems gliitering in the sunshine. In Wal-worth county alone twenty-four lakes can bementioned, among which are Lake Geneva,Crooked, Army, Potters, Booth, Lulu, Como,Turtle, Whitewater, Bass, Holdeus, Middle,Grove, Mill, Otter, and Pleasant, ranging fromone-half mile wide and one mile long to threeor four miles wide to ten or twelve miles loiig.All are stocked with fish, and on several ofthem are various water crafts, including yachts mallards, wora, black-heads, and spike-tails.Wild celery grows along the margins of thelake in great abundance, and for canvap-backduck-shooting is not excelled by even ChesH-peake Bay. On the ba Note About Images Please note that these images are extracted from scanned page images that may have been digitally enhanced for readability - coloration and appearance of these illustrations may not perfectly resemble the original work.

This Sportsman Guide Catalog - image-from-page-126-of-the-sportsmans-and-tourists-guide-to-the-hunting-and-fishing-grounds-and-pleasure-resorts-of-the-united-states-and-canadian-provinces-1880- on net.photos image has 1024x1018 pixels (original) and is uploaded to . The image size is 453386 byte. If you have a problem about intellectual property, child pornography or immature images with any of these pictures, please send report email to a webmaster at , to remove it from web.